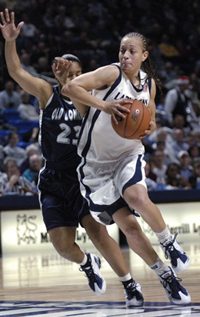 I’ve been a fan of college basketball for as long as I can remember.

Whether it was Christian Laettner hitting a last second shot to propel Duke past Kentucky, or Diana Taurasi leading UConn to yet another NCAA Championship, the NCAA Tournament has always provided plenty of Cinderella stories, drama, nail-biting anticipation, excitement, heartbreak, glory and a gazillion buzzer-beaters.

During the month of March, I’m either outside enjoying the freshness of spring or inside watching countless hours of CBS and ESPN, and filling out my brackets based on gut instinct, research, favorite teams, and the inevitable sleeper. Once my brackets are complete, I watch the opening rounds of both the men and women’s NCAA Tournament with reckless abandon. And no matter what, I can always count on two things: my brackets getting busted and an incredible Cinderella story that captivates my heart as well as my attention.

This year, I’m jumping on the Northern Iowa and Cornell bandwagon on the men’s side, and the Gonzaga bandwagon on the women’s side. All three teams pulled off incredible upsets, advancing to the Sweet Sixteen round. I also kept my eye on Portland State, hoping that they would prevail against a stronger, and more experienced Texas A&M team.

Making their very first appearance in the NCAA Tournament, Portland State is coached by Sherri Murrell. Murrell is the former coach of Washington State, and chose to fire herself after compiling an abysmal 27–114 record over the course of five seasons. Looking for a fresh start, Murrell accepted the head coaching position at Portland State. But this time, she decided to do things a little differently.

Murrell is an out lesbian—a rarity in the sphere of women’s basketball and especially among women head coaches. At Washington State, she remained in the closet. At Portland State, she left the closet behind.

According to the Seattle Times, Murrell altered her coaching style and decided she’d be open about her sexuality, proudly placing a picture of herself, partner and twins in the media guide. She is currently the only out Division I head women’s basketball coach in the country, saying the honesty is easier on her partner, boosters, players, and herself.

“It’s not like I had a team meeting and said, ‘Hey, I’m a lesbian,'” Murrell told the Times. “But if the kids ask, ‘Coach, do you have a family?’ I tell them. I made a conscious decision this was how it was going to be.”

The decision seems to be working. The Portland State Vikings finished the season with an 18–14 overall record, and played their hearts out in the opening round of the NCAA Tournament. Even though they lost to Texas A&M, Murrell couldn’t be more proud of her team.

Personally, I couldn’t be more proud of her. It’s because of these kinds of story lines that I fall in love with the NCAA Tournament again and again, year after year. I hope that more closeted Division I women’s basketball coaches follow Murrell’s lead. For her, her team and for Portland State, it’s a non-issue. But for women’s basketball, it’s a step in the right direction.