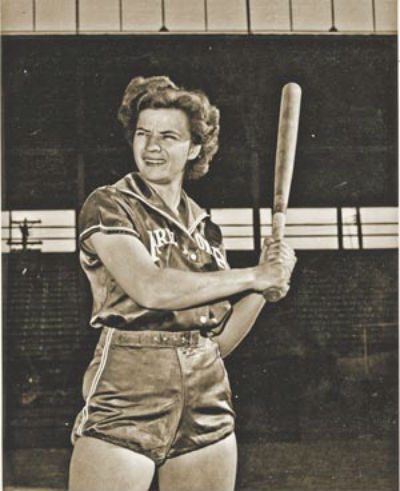 Wilkinson is widely considered to be the best softball catcher of all time.

Dot Wilkinson was only 11 when she joined the Phoenix Ramblers of the American Softball Association (ASA) in 1933.  She played for the Ramblers until 1965.

That’s 32 years of catching, running bases, hitting, practicing, sliding, arguing with umpires, arguing with fans, winning championships, taking long road trips in packed cars (without air-conditioning), playing double-headers (and more), playing seven days a week, staying in fleabag motels, tripling-up in hotel rooms, playing through injuries (sometimes even on broken bones), and doing it all for the simple love of the game.

Wilkinson even met her longtime companion and partner, Estelle “Ricki” Caito through softball. Caito was also an exceptional softball player in her own right. The two women spent their lives playing softball and dabbling in real estate. They flipped houses for a living, before flipping houses ever became a thing, and did all of the work themselves. Caito passed away in 2011 at the age of 85. The two women were together for 48 years, a remarkable milestone in itself.

Back in the heyday of women’s softball, players made little money and weren’t respected as much as their male counterparts. But that didn’t stop Wilkinson. Her legendary antics often preceded her whenever she stepped on the softball diamond. She once caught 47 innings in a single day. Followed a male heckler into the men’s bathroom after a game and smacked him with her glove. Cut out the stuffing inside of her chest-protector because it was uncomfortable. Played in the first Women’s Softball World Championship Game held at Soldier Field in Chicago, Illinois. Met the Rockettes. Was booed at her Arizona Hall-of-Fame induction speech by men because she was a woman. To which she casually quipped, “Thank you—now I feel at home.”

At the end of that speech, she received a standing ovation.

Wilkinson eventually retired from the game of softball as a 19-time All-American and three-time World Champion. She currently lives in Phoenix, Arizona where she has lived all of her life, in the same house that she once rehabbed and shared with Caito.