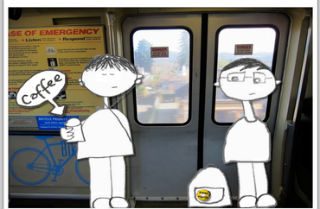 When I asked some trans people about topics they’d like this column to cover, the most frequent one mentioned was dating. So in the name of community service, I will begin to tackle this topic by interviewing Sam Berliner, a San Francisco based filmmaker whose pilot for a short film series, DATING SUCKS: A GENDERQUEER MISADVENTURE, has recently been making the LGBT film festival circuit.

Sam, who identifies as queer, trans and genderqueer, is a 31 year old East-Coast transplant living in the Bay Area. He got his MFA in Cinema last May 2013 from San Francisco State University and this series was born from his thesis film for school. He is also the Festival Director for Translations: the Seattle Transgender Film Festival.Right as he was finishing the film, Sam met his current boyfriend. Still, he says, “It was important for me to tell this story because I felt completely alone and isolated in my confusion about dating.”

DATING SUCKS: A GENDERQUEER MISADVENTURE is Sam’s astutely observed, sweetly narrated autobiographical story combining narration, animation, and live action filmmaking. It’s immediately compelling and amusing, and humanizes the vulnerability of the dating experience. In it we observe Sam coming to terms with his gender identity and sexual orientation,root for him as he sets out on a journey of self-discovery, and cheer him on as he learns about pomosexuality, explores the concept of “friends with benefits,” and tries on-line dating.

Sam states that his goal as a filmmaker is “to provide a positive voice for the trans, genderqueer, androgynous and gender-fluid folks not yet represented on screen, documenting our history, serving as a call to action to berecognized and respected by society at large, and forcing our culture to evolve. DATING SUCKS, while focusing on a sub-sub culture, is universally relatable because at its heart it is a search for love and oneself. By recognizing our similarities, my hope is that all people can find commonground for acceptance and understanding.”

Sam describes his own discoveries around gender and sexuality as having begun while growing up as a straight tomboy, then shifting towards a queer identity in college. He states, “When I was 23, I began to question my gender identity, started going by the name Sam, and adopted the term genderqueer. I really started seeking out more genderqueer and transmasculine community, at first for support around gender and friendships, and then for dating as well, but I was still too shy to talk about my attractions towards cisgender men.” In 2010, he started testosterone and in 2011 had topsurgery.  “As my outward appearance changed, it has created even more complexity around my already confused feelings around dating. “

This confusion, Sam says, was compounded by his loss of visibility in the dyke community and in simultaneously becoming more visible as a gay man, which he points out does not fully encompass his actual gender or sexual orientation, but is how he describes being read. Sam states: “It’s so complex and fascinating. If you think about it, sexuality labels are based on the genders of the people involved. So when you have folks with complex genders, what does that mean not only for the people themselves to navigate in terms of their own process, visibility, safety but also in terms of how people label and think about those relationships… My gender is complex, my sexuality is complex, but I am really just a person who is attracted to other people. If I let those labels go, I am free to explore. “

So far, DATING SUCKS has garnered lots of positive reviews since its premiere last June 2013 at Frameline: the San Francisco International LGBT Film Festival. It has since screened at more than 45 film festivals around the world and has won four awards so far. These include Winner of the Gender Bender Competition at the Hamburg International Queer Film Festival 2013, and The Golden Reel: Jury Award for Best Experimental or Animated Short at Reeling: Chicago LGBT International Film Festival 2013.

As for Sam, he does have some final dating advice for our readers, no matter your gender or sexual identity. Sam says: “I have done a lot of thinking about this issue, and am by no means an expert, but the best advice I have is to just be yourself. I tried for many years to fit into different sexual orientation boxes and that meant denying parts of myself. I feel so genuinely fulfilled to be able to be my whole self now. Be proud of who you are and know that there are people out there who you will find who will love you. You just have to be you first!”