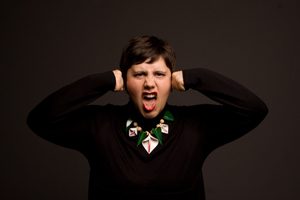 December 1st is my birthday, and I can’t think of a better way to celebrate the month of my birth than by declaring it Drama-Free December.

As lesbian life too often goes, I have been recently plagued by drama. Sometimes this is completely and utterly my fault, and I lead myself right into the battle. Other times I’m just an innocent passerby who has been grabbed and dragged in. Most times, it’s somewhere in the middle and I don’t realize I’m actually in drama until I’m sitting having a beer explaining the situation to a laughing Token Straight Guy.
Obviously, sex is often the cause of drama, especially when people are at different places in their sexual explorations. But instead of avoiding sex altogether (is this even possible?), let’s learn from my mistakes.

For example, the other day I was at a club with some friends when I noticed a woman at the bar watching me dance. Catching her eyes, I gyrated my hips seductively and gave her a “come hither” glance. Turning around towards my friends, I soon felt arms wrap around my waist and pull my hips into them. Pressing myself into her, I leaned back and said simply, “Hello.”

When the bar closed, we headed back to my house. She was super butch, cocky and had flirted with other women that night, so I assumed she was looking for the same thing I was: wham, bam, thank you ma’am. That was my first mistake. This December, I will not make assumptions.

When we got to my house, she began to talk about what having sex would mean, if I would write about it, who would know, if we could be friends after, if I was looking for a relationship, etc., etc., etc. I climbed on top of her and began to kiss her in that “I want you inside of me now, stop talking” kind of way. She kissed back in that “I’m used to making love” kind of way. This December, I will notice people’s emotional babble before kissing them.

When she started talking again, I pulled down my dress and stuck her face between my breasts. That shut her up, and she began tonguing my nipples as she ripped my tights off. Moving to the bed, she put her hand inside of me and immediately shut off. I mean, what she was doing was nice and all, but she was definitely fucking me from afar.

I figured, we’re here, might as well finish – but I didn’t have time. She pulled out, rolled over and lay there staring into nothing. I asked what was wrong, and got almost an hour of analyzing her feelings for other women and hearing about how she is not ready for random sex.

Meanwhile, I’m naked, cold and have big blue ovaries. This December, I will not ask what is wrong during sex.

The experience was more bonding than the bondage I wanted, but this December I will focus on the fact that I gained a friend even if I lost an orgasm. Potential drama happens all the time, but December is now officially the month to mitigate damages, the month to stop drama in its tracks. Don’t know how? Neither do I really, but we can work through it together and learn for the sake of our community.