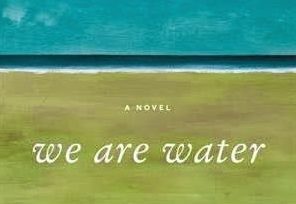 Annie’s past finally catches up to her with tragic consequences. We Are Water is ultimately a story of betrayal, redemption, secrets, and in the end, love, particularly between Annie and Viveca

We Are Water is no exception.  Lamb introduces us to Annie and Orion Oh.  Annie is an artist with a dark secret in her past, and Orion is a university psychologist who is asked to leave his job when one of his students commits suicide and a sexual harassment charge is brought against him.  Orion and Annie have three children, twins Andrew and Ariane and youngest, Marisa, each damaged in some way by their mother’s secrets and bizarre behaviour and their father’s absence during their childhood years.

As the book opens, Annie has left Orion after 27 years of marriage and is preparing for her wedding to Viveca, an art dealer who has helped Annie make a name for herself in the art world.  Each character alternates chapters by giving their perspectives on their parents’ marriage and their mother’s upcoming same-sex wedding.  Andrew is an Army nurse engaged to a conservative Texan’s daughter.  He has taken the brunt of Annie’s wrath through the years and tries to understand why.  He and his fiancé call Dr. Laura Schlessinger on her radio program to ask if they should attend the wedding!  Andrew’s twin, Ariane, works at a soup kitchen in San Francisco.  She is plain and overweight and wants more than anything to have a child.  Men aren’t interested in her, but they are in her pretty younger sister, Marisa.  Marisa is a would-be actress in Los Angeles, who drinks too much and gets herself into some compromising situations in order to pay her rent.

Everything that the characters are dealing with comes to a head at Annie and Viveca’s wedding.  Annie’s past finally catches up to her with tragic consequences.  We Are Water is ultimately a story of betrayal, redemption, secrets, and in the end, love, particularly between Annie and Viveca.