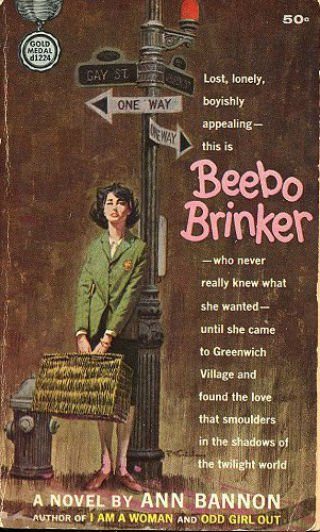 This is a series of five fiction books, (all with different titles) which became known as “The Beebo Brinker Chronicles”, written from 1957 to 1962.

The fifth is a prequel called Beebo Brinker. These books explore the lives and loves of its three main characters, Laura Landon, Beebo Brinker, and Beth.

It is the 1950’s; Greenwich Village, New York where most lesbians lived. The majority of the stories in these books take place here also.

At this time, there were no gay rights or support groups and the police could knock on your door at any time, and jail you, just for being a lesbian. Basically you identified, as either “butch” or “femme”. Women who were butch wore men’s clothes, acted accordingly, and looked after the femmes. Lesbian bars were dark, dingy and required a password to get in. This was to try to keep out the authorities, who would raid the bars.

Laura, Beebo, and Beth all come from very different backgrounds, but end up in Greenwich Village.

Beth has run away from Laura to get married after their college affair, leaving Laura broken-hearted. After a vicious argument with her father, Laura leaves Chicago for New York. This is where Laura meets Beebo. They live together for two years. At first Laura thinks she is in love with Beebo but after the passion dies and she is unable to return Beebo’s love, there are fights, heavy drinking, and violence.

Laura leaves Beebo and goes to live with a mutual gay male friend. This is where lesbian and gay parenthood, IVF and marriages of convenience are explored, which in their time were unthinkable.

Beth has decided that her marriage and children are a big mistake as she finally realises that she is still in love with Laura. Beth leaves her family and starts a long journey, not really knowing where to find Laura but hoping if she does, that Laura still loves her too.

The final book is a prequel. This story, tells of how Beebo came from Wisconsin to New York’s Greenwich Village. Beebo arrives there, a very young and uncertain girl, but by the end of the story, we see the emergence of the handsome young butch she will become.

Along the way there are beautiful girls to explore and an affair with an international movie star.

Ann Bannon helped to end the isolation and ignorance that had kept thousands of gay women in emotional prisons, and paved the way for the new generation of lesbian writers that were to follow. Ann Bannon’s The Beebo Chronicles have been reprinted many times, and in different languages. They are read, remembered, and taught in women’s studies and LGBT courses around the world.