** TRIGGER WARNING ** Racist tweets are reproduced below as evidence of racism.

They trend every day on Twitter. Innocuous hashtags meant as jokes or political puns or just plain entertainment. On Friday night the one that was trending was #ReasonsNotToDateMe.

Now in point of fact, I’ve been married to the same woman for what will be 17 years on October 6. But it had been a long day of political turmoil. I had been writing about the Trump camp’s racism and the Charlotte Uprising after the extrajudicial killing of Keith Lamont Scott. GOP VP nominee Gov. Mike Pence said there was “too much talk about institutional racism.”

I’d gotten a lot of blowback from the “All Lives Matter” white supremacists. So, like some of my other political friends on Twitter, I jumped into the hashtag with some political snark:

#ReasonsNotToDateMe
I’ve been told I’m a race traitor who promotes #whitegenocide.
Like it’s a bad thing…

Was it provocative? Maybe. Okay, probably. But as a white lesbian daughter of civil rights worker parents fighting racism in my 66 percent black city and 95 percent black neighborhood as well as in my personal and political life, I was tired of hearing how that essential work was somehow jeopardizing white people.

As for the concept of “white genocide,” this is an Alt Right meme that is just another facet of racism and xenophobia. According to the Alt Right – like Trump’s campaign chairman, Steve Bannon, who is also CEO of Breitbart News, the Alt Right’s main news site – “white genocide” is occurring due to “race mixing” and the “flood” of Middle Eastern refugees into “previously pure white” countries.

Wikipedia describes white genocide as “a white nationalist conspiracy theory that mass immigration, integration, miscegenation, low fertility rates and abortion are being promoted in predominantly white countries to deliberately turn them minority-white and hence cause white people to become extinct through forced assimilation.”

As a tall, natural blonde with blue eyes from a family whose Scandinavian lineage can be traced back to the Old Norse Vikings, I am the physical representative of what Adolf Hitler was hoping to breed for his Master Race (das Herrenvolk) of Nordic and Aryan people. 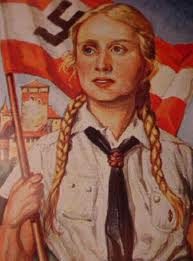 So I get told regularly on Twitter that I am a purveyor of “white genocide,” which I consider a racist/xenophobic fantasy. Alt Right Trump supporters are vocal about how white women should behave.

@VABVOX @American_J2 how long do you think negroids will tolerate you? They will turn on you eventually because you are white

@VABVOX @American_J2 have you seen riots where whites targeted? You think because you have BLM on your profile they will spare you?

Most Alt Right Trump supporters – the people Hillary Clinton was excoriated for calling “deplorable” – immediately pounce on women like me as Jews, whether we are or aren’t.

Spotted by a friend at the county fair in Bloomsburg, Pennsylvania. pic.twitter.com/dgWoc7Yqpb

I am Catholic, but half of my family is Jewish and my wife is half Jewish. But even if no one close to me were Jewish, I would stand against anti-Semitism the same way I stand against racism, Islamophobia and xenophobia of any kind. We are a global village and we should all be working for justice and equity within that seven billion and counting village.

My wife reminded me that Jews have always been the first scapegoats – anti-Semitism predates Christ. Jews/Hebrews were slaves. Pogroms drove Europe. And in our own era, the Holocaust (Shoah) decimated more than a third of the world’s Jewish population.

The reality of which made the attacks I received over the next few hours all the more chilling. My siblings and I had been raised with the stories of family members of my mother’s who were married to Jews who were rounded up for not renouncing their husbands and wives. One of my mother’s closest friends was a German refugee whose experiences as a teenager during the war had changed her life in ways my mother only hinted at. And I had friends who were the first generation of children of Holocaust survivors. The numbers tattooed on their mothers’ arms spoke of something I never knew directly, growing up within the confines of a Catholic convent school.

The family in which I was raised in the 1960s and ’70s was deeply political and my parents’ friendships reflected that: black men and women, Jewish women and men, a smattering of Irish immigrants. I’ve always been grateful for that multicultural upbringing.

And so it’s still shocking to me that so many Americans want to preserve some white-only world that I myself never knew and frankly can’t quite imagine. Everywhere I have lived – no matter how briefly, as I moved around a lot as an investigative reporter in my 20s and 30s – was at the very least racially mixed. Trump’s “Make America Great Again” message has always seemed more like “Make America White Again,” despite his recent badly crafted attempts at luring black voters with his tales of how terrible their lives are and how it’s all the fault of Democrats.

Not being a person of color and not being Jewish or Muslim, it’s easy to forget that kind of Othering – the sort director Jill Soloway talked about as a Jew herself at the Emmys.

But as one Jewish colleague who witnessed what happened to me on Twitter said, “They don’t see ‘us’ as white, you realize.”

The tweets explained it to me clearly – these Alt Right folks had “found and labeled” me as one said, and it was as a Jew.

@VABVOX (((You)))) got found out and labeled ,that enough for now

That same tweeter sent me this graphic depiction of how he sees Jews – circa Germany 1933, replete with grotesquely hooked nose:

And then there were others – many others.

@VABVOX jews acting like this and are suprised a second holocaust is right around the corner,may it be soon.

The reply was quick:

It better be complete this time.

Then a photo of Poland’s Auschwitz concentration camp where an estimated 1.1 million mostly Jewish inmates were murdered, including Anne Frank, with one word: “Yes.”

Then it was ways to rid the world of “kikes.”

@VABVOX kikes need to go too

@VABVOX And you people wonder why history repeats itself…

There was no holocaust.

Fighting back brought more white genocide folks into my mentions:

with their pictographs of how white genocide works:

and they are all Trump supporters:

There’s no such thing as #WhiteGenocide.
But I would welcome people like you not being around to hurt decent people. https://t.co/zP7UJRPbAE

Two women said they hoped I wouldn’t breed with people of color – then they blocked me for being a “race traitor,” but one of their friends responded with this:

@Dutchadian @GingerMcRedd @VABVOX The day is coming when race traitors will get exactly what they deserve. You are trash of the worst sort! pic.twitter.com/3SAbffG8p3

Another who decided I was too old to breed, made a play on my name:

Another just wanted me to know who we Jews really are:

One person who targeted me with so many vile tweets I reported him to Twitter sent this, from behind my block (a violation of Twitter’s terms of service):

I put this jewess in her place and lo and behold it’s….ANNUDAH SHOAH pic.twitter.com/HQHLiKDEQh

Joking about the Holocaust (Shoah).

He had previously tweeted this, among other things:

Insolence and disrespect for the white race. It is time to drive these parasitic desert people out of our country. https://t.co/hHJEONqJJ1

I’m not the only person to recognize the links between the Alt Right and Nazism, nor to hear the resonance of Hitler in Trump’s words.

Actor Kirk Douglas is 100.
He remembers when Hitler was considered a “joke.”https://t.co/iLk3QPdTqm? pic.twitter.com/mFzjwIyD8p

And a Holocaust survivor in Miami has gotten her citizenship so she can vote for Hillary – and because Trump scares her.

So she can vote for @HillaryClinton!

As a woman journalist on social media, I’ve gotten attacked for various stories I have written, issues I have addressed and of course, this election.

But I and other journalists have experienced a whole new kind of internet trolling since Trump opened the Pandora’s basket of deplorables. In April, Julia Ioffe – who is Jewish and a Russian immigrant – profiled Melania Trump for GQ. Mrs. Trump didn’t like the profile. Nor did Trump or his supporters. They responded with a barrage of anti-Semitic attacks that included photoshopping Ioffe into a concentration camp uniform.

I’m not as well-known as Ioffe, who’s a feature writer for America’s top magazines. Nor as well-known as Newweek’s Kurt Eichenwald, who also complained of such attacks after his cover story exposing how Trump’s business ties would present a conflict of interest to a Trump presidency. Odd. I haven’t gotten a death threat from a neo-nazi trump supporter today. Must be off sieg heiling somewhere.

But there are also many people who aren’t journalists who are getting this harassment from Trump supporters. Who are terrorized by the oven references. Who may have family members who were killed in the Holocaust. Or who already have to face this kind of anti-Semitism in real life and don’t want more of it online.

America has always had racists and xenophobes. We have an ugly history with non-white people as the opening of the National Museum of African American History and Culture underscores. (And which Trump misnamed in a tweet.) It took 100 years for this museum to open. And its opening has been controversial among the Trump contingent: Where is the museum of white people, they demand.

America’s anti-Semitism is less well known, but the fact is, if the country didn’t hate Jews as much as it has (and does), Anne Frank might be alive today. Her family tried to get out of Germany to the U.S. but then, as now, xenophobia over-ruled compassion. Neera Tanden, president of the progressive policy institute Center for American Progress and a Clinton supporter, has been trolled by Trump supporters as an Indian American. “Not that kind of Indian” she has said repeatedly. The same night I was getting the anti-Semitic treatment, Tanden noted, these people want us to step back from the fray, to get people of conscience to cease and desist, to make us back down and away.

Reminder: Trump’s goal is to debase politics so much that we turn away & only die hards vote.That’s how he can win.But we have to fight thru

The first presidential debate won’t address any of these issues, but it should. Because the soul of America is on the line: No one should experience what I did. But Trump has opened the door to this. And none of us knows for sure if it will ever close again.