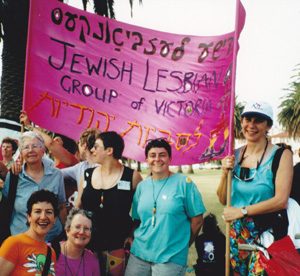 They need your help to make a documentary about their two successful decades.

Back in 1992, when words like ‘lesbian’ and ‘Jew’ were still whispered and it wasn’t always safe to be open about who we are, three friends organised a workshop for Jewish lesbians. Expecting only a handful of women; heaps arrived, filling the room with warmth, laughter, and tears of recognition and relief. We knew we had to keep on meeting! So our group began.

Since then, the Jewish Lesbian Group of Victoria has provided a social and support network for Jewish lesbians and a powerful lobby group initiating significant change in lesbian, feminist, LGBTQI and Jewish communities around Australia. We’ve challenged anti-Semitism and xenophobia in LGBTQI communities, and lesbophobia in Jewish communities. Despite immense pressure we refuse to remain silent and invisible.

In changing our communities, we’ve also been changed. We come from wide-ranging backgrounds, perspectives and ways of expressing our Jewish and lesbian identities. For twenty years, we’ve negotiated our diverse identities, honouring difference and working together as equals to create a welcoming community for all.

Casting those first drops into the sea of our communities twenty years ago, we had no idea how much we would change the tides. There were many first currents, frightening, exhilarating, life-changing, all at once. We created ripples as the first group in Victoria linking Jewish identity and sexuality. We made a splash as the first Jewish group marching in Pride March Victoria and Sydney’s Mardi Gras. We unleashed a tidal wave as the first same-sex group to have a stall at Melbourne Jewish community’s ‘In One Voice: Concert in the Park’. These acts of courage and many more deserve to be documented and celebrated.

In a changing world, our bold beginnings and remarkable achievements need to be recorded. We believe a documentary film-reviews is an ideal way to preserve our story and share it as widely as possible. Using seed funding, we’ve produced our fabulous trailer, giving a ‘taste’ of our delicious tale.

Now, we plan on producing our 27-minute documentary, ‘It’s Who We Are’, which requires funding our film-reviews-makers to record, transcribe and edit interviews, film-reviews group gatherings, capture twenty years of archival material on film-reviews and weave the strands of our experiences into an inspiring and informative documentary. Funding is also needed for distribution to film-reviews festivals near and far. To achieve this, we’ve launched a crowd-funding campaign at pozible.com/itswhoweare with a target of $10,000 – the minimum that film-reviews-making and distribution will cost.

We hope you can help us capture our journey of courage and connection. So far we’ve raised over $6,000 — a fantastic effort — but crowd-funding works on the principle of all-or-nothing! Unless our goal of $10,000 is pledged by 16 October 2012, we don’t get a cent.

So, we need your support. Every little bit helps. If YOU pledge the equivalent of one round of drinks at your favourite dyke bar, or a couple of lattes with your mates, or the cost of hiring one leso DVD, we’ll be able to produce and distribute our film-reviews.

’It’s Who We Are’ will showcase real, local, culturally diverse lesbians making a difference. Please let us know what that means to you by making make a pledge today pozible.com/itswhoweare.

Thank you for your support.