Some people are so huge in life they deserve all the adjectives in death.

Legendary lesbian filmmaker Barbara Hammer was one of those people.

Hammer died on March 16 in New York City after a long battle with ovarian cancer. She had been in hospice care.

On Twitter the morning after she died, I wrote, “My longtime friend Barbara Hammer has died.

She was an extraordinary talent, a brilliant filmmaker, a gutsy, fabulous, radical af, deeply engaged lesbian feminist and I loved her madly for her brave unconquerable self and her larger than life humanity, which impelled all her work.

“I met Barbara thirty years ago through another friend, the late photographer, Tee Corinne. Both of these iconoclastic lesbian artists taught us that there was a gaze that not only was not male, but also was not straight. They showed us the lesbian feminist lens. What vision they had.

“I cannot express strongly enough how much more I was taught to see by Barbara Hammer. The risks she took illumined a world previously unseen. Barbara was a lover, a teacher, an artist and a radical political voice.”

I shared a series of photographs of Barbara who was a wiry, cool, butch hipster . One of those photos is of her standing in front of the historic Stonewall Inn, giving two thumbs up, smiling with a rainbow flag in her teeth instead of a rose.

That photo is vintage Barbara Hammer, the things I wrote about her expressive of the impact she had on all around her. She engaged people right away–she never dissembled. She was forthright and funny, a font of information about myriad topics and she was an extraordinarily compelling person and artist whose persona and work challenged one in equal measure.

We use the words iconic and groundbreaking far too freely, but Barbara truly was both. There is no other lesbian filmmaker who did the kind of experimental work she did nor who chronicled lesbian and feminist lives the way she did. She was transgressive throughout her life and her work is reflective of her deeply political and subversive gaze. In the canon of queer cinema, Barbara Hammer is unique. 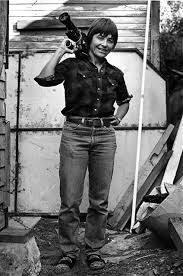 Born in Hollywood, Los Angeles May 15, 1939, Hammer’s mother wanted her to be the next Shirley Temple. Instead, she became an iconic lesbian filmmaker, making her first film in 1968. She made 75 short and feature films in her lifetime. In her final years battling ovarian cancer she became an activist for the right to die, which she chronicled in The Art of Dying, about what she called “Palliative Art.” She was awarded a Guggenheim fellowship in 2013 for her ongoing work in that arena.

In an October 2018 article in Art Forum, Hammer was quoted from her lecture on Palliative Art at the Whitney Museum in New York. At the lecture she told the audience, “I hope that what is important to you stands out most clearly as it has for me, when life is measured in months instead of years. I hope you will make your work from the place of needing to create without paying heed to the sugarcoated traps of ‘success’ promised by ‘the art world,’” she says early on in The Art of Dying or (Palliative Art Making in an Age of Anxiety). Her lecture on living with advanced cancer while making art began as an impromptu award acceptance speech at Temple University last May, before being delivered at Tyler School of Art, Yale, and, finally, at the Whitney.

To Art Forum, Hammer says, “My work has always been about dealing with subjects that haven’t been brought forth….And if anything I’d like to be a role model, I’d like to say, join me! There’s nothing I like more than a lecture anyway!”

Ever the iconoclast, Hammer left an early marriage to a man, bought a Super 8mm camera and began recording her life as a lesbian. Her 1974 film Dyketactics is considered by many to be the first out lesbian film. It is a lush, dreamy film about the sensuality of women’s bodies and touch. While the male gaze is so often riveted on women’s breasts, Hammer takes long, languid shots of vulvas. Her film is a caress: We feel the loving touch as the images dissolve into each other. It’s an extraordinary work even now, 45 years after she made it, just five years after Stonewall.

Hammer’s 1992 feature, Nitrate Kisses, an exploration of the repression and marginalization of LGBT people from World War I on, was one of her masterworks. In Nitrate Kisses Hammer depicts various couples making love, one of which is an elderly lesbian couple: Hammer was always breaking ground: women’s bodies are deemed unsexual/sensual after a certain age. She wanted to show that lesbians are sexual and sensual beings throughout our lives.

In many respects Nitrate Kisses is one of Hammer’s most intimate works. It is a lesbian and gay history of transgressive sexuality and ways of being in the world. One of the stories she tells in the film is that of the American writer Willa Cather, whose lesbian writings were burned at her death, destroying that history. Nitrate Kisses is reclamation and exultation: It is a film about who we were and are as queer women and men.

But it is also about how our stories, lives and very bodies have been censored. One character in the film explains the chilling effect the Hays Code had on lesbian and gay stories, detailing the restrictions that censorship ruling had against gay and lesbian art in cinema. From 1931 through the late 1960s, it was prohibited to tell the stories of lesbians and gay men in film unless it was obscured and subtextualized.

Nitrate Kisses was named one of the 100 All-Time Greatest Films by Women by Indie Wire. Hammer was awarded a National Endowment for the Arts grant for Nitrate Kisses and she said in interviews that she considered it her best work. Nitrate Kisses was nominated for the Grand Jury Prize at Sundance in 1993, and won the Polar Bear Award at the Berlin International Film Festival. In a 1993 interview with me for Curve magazine, Hammer said Nitrate Kisses and her work overall was in part about showing lesbian sex through a lesbian lens. In a 2018 interview she said, “I have never separated my sexuality from my art, even if the film has nothing to do with lesbian representation.”

That was one of the most radical aspects of Hammer’s work.

Barbara Hammer was featured in Philadelphia filmmaker Judith Redding’s book Film Fatales: Independent Women Directors. Redding said Hammer broke ground by proving lesbian films had an audience, were important, were their own film canon, could–and should–be shown. Redding said, “Hammer’s early work focused on gender and sexuality, and she became a torchbearer for women filmmakers in general, proving that one woman with a camera could indeed both make films and have them screened.”

Redding, who had worked with Hammer over the years, said, “She was generous with her time and advice, and became a lodestar for experimental filmmakers across the globe. She leaves behind a dense body of work, almost all of it autobiographical, snapshots of the rich fabric of her life.”

In conversations with queer filmmakers Pratibha Parmar and Campbell X, both told me that Hammer’s lens was iconic in its lesbian gaze and that it was an honor to have known her.

Parmar said, “It’s hard to believe that her unstoppable life force will no longer be with us.”

Campbell X called Hammer a pioneer, and said, “She was so incredible. So accessible to other filmmakers. So supportive. Great to hang out with. Fun. Loving. Sharing. Gone, but never forgotten. Never ever.”

In 2015 Hammer established the Barbara Hammer Lesbian Experimental Filmmaking Grant. In a statement about the grant she said, “It has been the goal of my life to put the lesbian lifestyle on the screen. Why? Because when I started I couldn’t find any!”

At the Whitney lecture, Hammer said, “Everyone has the right to die when she wishes. We don’t have the right to choose our birth but we should be able to determine the time of our death should we wish to. This especially applies to people like me with terminal cancer. I have lived a good long life but now I’ve reached a period of living with increasing diminished capabilities due to a cancer that can’t be cured and for which I have had every treatment possible. I am in palliative care and I am preparing for my end.”

Of her 2018 film Evidentiary Bodies, Hammer said, “In these horrific times when lies are blatantly exclaimed as truths, when fear makes us withdraw from each other, when difference is maligned as xenophobia and when atrocities are committed in the name of spectacle, we must find and practice a quiet way of compassion, sympathy, and generosity through E M P A T H Y.”

Barbara Hammer had compassion, generosity and empathy to spare. She was an amazing light in an often dark world. She lived her lesbian life to the utmost and modeled for others–right to the end–how to do the same.

Hammer is survived by her beloved and loving spouse of 30 years, the human rights activist Florrie Burke.