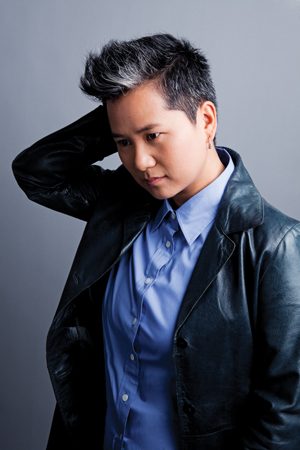 The lesbian playwrite on diversity, the theater and her latest play.

A dynamic force in the N.Y.C. queer community, Ks Stevens is an out Asian American playwright best known for her theatrical works on the Lower East Side—and for being crowned Miss Lez in 2009.

My sister and I were both adopted from Vietnam before the fall of Saigon. My parents are Caucasian as are a lot of my extended family, but there is a mix there too. My family of choice in the queer community is very mixed.

My Asian American background has made me unique when seeking to join theatre groups looking for diversity because I don’t write just Asian plays or just queer plays.

I grew up in New York City and my parents took us to a lot of Broadway shows. Musical theater saved my life. I was very depressed as a kid, before I came out. I just kept those songs from Annie in my head. That story got me through some really hard times. The King and I was the first time I ever saw Caucasian people being respectful to an Asian man.

This was in the ’70s, and that play is still one of the only pieces of media that gives respect to Asian men. A Chorus Line was like the first reality TV—all about people who wanted the same thing and empathy was presented in a way I want to create in the theater. Human stories that break the wall and foster an exchange inside the theater, an intimate exchange that I try to create in all my work.

On her new play

BIG EXCELLENT 20TH REUNION brings the entire LGBTQA community together with a cast of six principals. I have created rich characters with an intentionally diverse ethnic palette. It’s a comedy with serious themes delivered with humor and through musical anthems.

Ally is a single lesbian mother who passes away from cancer a few days before her 20th high school reunion. She sends Erika, her 18-year-old adopted daughter, a woman of color, in her place, to deliver her last message to her dearest friends. One by one Ally’s best friends from high school show up because she sent them each a plane ticket. It is quickly revealed they were all closeted and some type of queer.