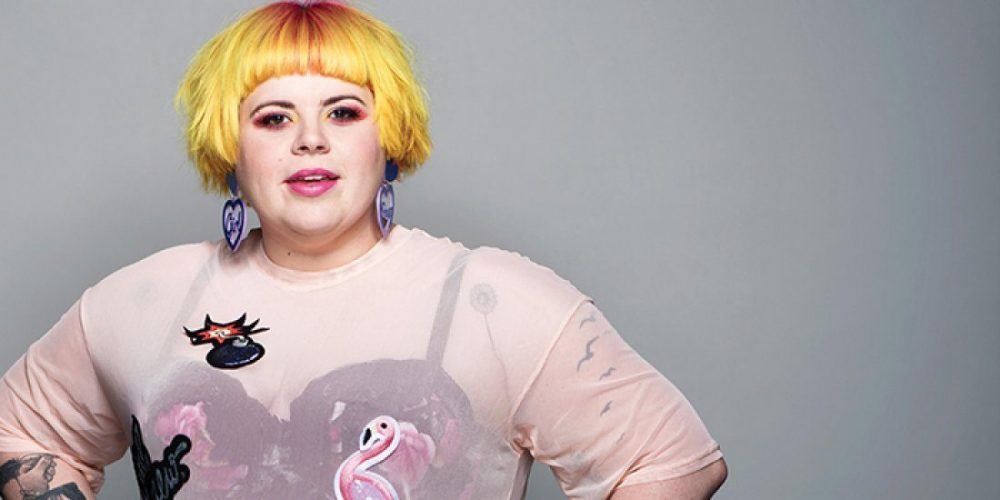 Claire Christian, writer of Lysa and the Freeborn Dames

We chat to Claire Christian, writer of Lysa and the Freeborn Dames.

First of all, thank you for the pink beanie! It was quite a surprise to see it waiting for me on my desk at work.

You’re welcome! Thanks for the interview! Funny story…I always thought LOTL stood for Love of the Lesbian…so, now I’m not only loving lesbians but lesbians on the loose too.

Tell me about where the beanie came from? What does it stand for and how does that link to Lysa and The Freeborn Dames?

The Pussy Hat project happened in America when the Trump revelation came out about him grabbing women by the pussy. People were then encouraged to make their own beanie and wear it to the 2017 Women’s March. The protest went off and thousands and thousands of beanies were made and worn in protest of Trump and in celebration of women’s rights all over the world. It’s a pretty phenomenal example of activism.

Lysa and the Freeborn Dames takes place around the time of the 2017 Women’s Marches. Our central character, Lysa, a young, bold, lesbian goes back to her small rural Australian town armed with a ‘Pussy Power’ flag and a bunch of pussy beanies ready to stage her own protest.

Side note: I wonder what the collective noun for a bunch of pussy beanies is?!?

Is Lysa’s character based on you or your personal experiences at all?

Lysa is inspired by my experiences as a queer woman, and the by the experiences of the women around me, absolutely. When I was writing I wrote an anonymous survey and asked the women in my life to fill it in and share it, and I had over 150 responses. I was curious about how other women perceived the things I wanted to talk about…sexuality, politics, gender, fear, motherhood, sex, women we admire – the answers were vulnerable and honest and so a lot of that ended up in the play too.

What sparked the idea for this play?

I wanted to contribute to the conversation about gender that is happening right now. It’s a very unique moment in history we find ourselves in, where we’re collectively highlighting the things we have experienced and the things we will no longer tolerate. La Boite Theatre Company has a wonderful relationship with QUT and so the opportunity to create a story where young women were central to the plot was exciting.

We very rarely see intergenerational stories being told. It shouldn’t be a bold or new or even political act to put seven women on stage, for the lead character to be a young lesbian woman, in a play written and directed by queer women – but it is. Plus, it’s a comedy – I wanted to write an accessible, and funny story that people would enjoy.

The women in my survey when asked, ‘what’s something we don’t talk about but should,’ I was overwhelmed by the number of women who wanted to talk about period poos – so I can only do what the people want.

How do you relate to this play?

I was a fat, quirky, queer kid who loved Theatre and who hated the beach who grew up on the Gold Coast – so high school was super fun for me. I relate to Lysa – to that young and angry and desperate energy to just have people accept who you are, and that belief that you can change the world.

There are a lot of things I wanted to explore in the show, but a big one was legacy – thinking about, and honouring the women, who have come before me, who have all fought in their own ways so I can have the life I have now. It’s pretty incredible when you think about the long line of women and activists who have come before you.

How did you get into playwriting – any advice/ tips/funny anecdotes?

I always wanted to be a writer – it was that secret dream that I didn’t tell anyone because it was too real and vulnerable and scary.

But I used to be a teacher at a private school and I couldn’t find a play that was appropriate for my kids to do – so I thought, ‘I’ll just write one.’ That first play I wrote changed the whole trajectory of my life and my career.

I love writing and making Theatre because you quite literally get to play all day and night. It’s the best job ever.

It seems like you’ve worked a lot into the play – if you had to boil it down to one sentence though, what’s the essence of what you’re trying to say through Lysa and The Freeborn Dames?

Fighting for equality is always right, change is entirely possible and synonyms for vagina will always be funny.

How do you hope women will feel when they leave this play?

I hope they feel empowered to continue fighting every day in their own small ways. And I hope they want to call their Mum, or a significant woman in their life, and say thank you.

And what about the men?

I hope they experience the above, but also I hope it encourages conversation and stepping up and calling out toxic behaviour. I hope they high-five the women in their life who are amazing. I hope it gives them perspective and changes things, even if it’s only tiny changes. I think that’s how we change the world – small changes, every day, by everyone.

Lysa and the Freeborn Dames isn’t about yelling and blame, it highlights this idea of an angry feminist and converts it into this funny, complicated, fantastical, glitter filled, but very real night, in a footy club where everyone is just trying to do their best. And that’s all we can do – do our best.