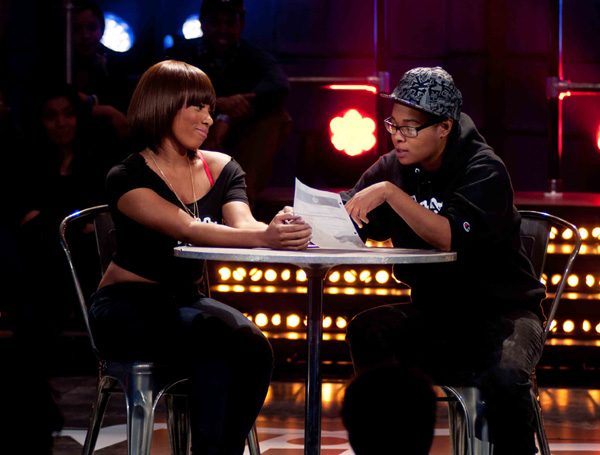 Out comics take the stage on Wild n Out

MTV’s hit comedy improv show Wild ‘n Out has brought the spotlight on two out comics Chaunte Wayans and Lauren Flans. Both with distinctly different comedy styles, Wayans and Flans did comedy tours separately and have now landed together to take the stage as the only lesbian comics on the show.

How has your first season on Wild n Out been like?

Chaunte: My first season on Wild ‘N Out has been amazing. My fan base has grown tremendously and the show has brought more opportunity in my journey. It’s just exciting to see myself on the big screen and see my dreams begin.

Lauren: Watching this season has been AWESOME! I am so impressed with how good it looks in terms of how it’s shot and edited. All of that kind of stuff is really cool to me, since you have next to no sense of it while you’re filming. Also, it’s been really cool with Twitter. They encourage us to live tweet the show, so Rasika and I (and sometimes Doboy) have done that together for almost every episode, and that’s been a total blast. It’s been really cool to be able to hear from and respond to fans via Twitter; that kind of accessibility still blows my mind.

All of that stuff has been really fun for me. The response and support from everybody has been great!

How does it feel to be one of two lesbian comics on WIld n Out?

Chaunte: It sure is amazing. To be able to step out and prove to the world is possible, there’s no greater feeling than that. Nick Cannon gave me a great opportunity, so it’s a beautiful thing.

Lauren: It feels great! I never really thought about it. It was more like, in each episode there’s only two girls and they usually put one of us on each team.

Would you say you’re a natural at rapping comedically?

Chaunte: Am I a natural? Have you checked my résumé?  I’m the Worst Rapper Alive. The list goes everybody then me!

Lauren: I would say, I learned to do comedy rap because I used to work at this sketch comedy in Amsterdam called boom and the way we closed every show was you have to interview somebody in the audience and you then you rap for them. So I learned really fast on how to do comedy rap and I worked there for a number of years.

How do you mentally prepare yourself for each episode?

Chaunte: I’ve never really done improv, but it just comes with part of being on stage. And being true to yourself and kind of figuring out whats the first thing that comes to mind. For me doing stand-up comedy has taught me how to think on my feet.  In stand-up you have to be prepared to respond to any given situation as well as observe what’s going on.  I just really tried to trust my instincts and jokes.

Lauren: The biggest prep I did was researching the guest captains – reading up on them, listening to their music and/or watching clips; etc. So I definitely devoted a good chunk of time each night to thinking about the games, and having some stuff in mind for ones like “Let Me Holla” and “So Fly.” And of course with Wildstyle, you’re constantly thinking about rhymes for your cast mates in the back of your head throughout the entire shoot. But it was just as important to take time out from all that stuff and just go down to the hotel bar and have a beer with some of the cast.

Is there anything in this season that you regret doing or saying on stage?

Chaunte: Not at all. I think as an artist you always wish you’ve done more, but I try to not live with regret, everything is a learning experience to help me grow.

Lauren: Nothing that I can think of, fortunately! For me, it’s more that I have one or two regrets about stuff I didn’t do or say. Like stuff where I think I maybe didn’t go hard enough, or when I hesitated for a second and missed my window. With Wildstyle, it’s INSANE up there – you really have to get your bars in clean and quick, and you gotta hold onto the mic if you want to keep going on somebody else after you’ve already had your turn. Especially if you are a Relatively Tiny Person. But that MGK episode was only the second one that I shot, so I was still learning all that stuff!