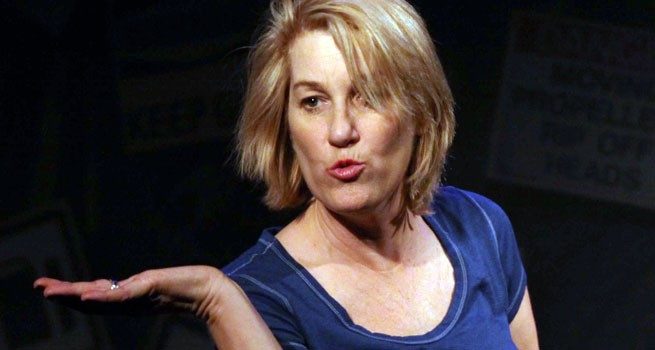 The North American Fringe Circuit is all original programming, all the time. Abounding with lesbian, queer female and queer-friendly feminist performers, the Fringe circuit provides a venue for innovative, quirky, outrageous and full-on live performances at bargain basement prices. Tickets are usually in the $8-12 range.

Inherent in the Fringe are the egalitarian ideals and principles of accessibility to all, a return of 100 percent of box office proceeds back to the artists and an unjuried selection process (participants are drawn by lottery). This grassroots idea of theater is what makes the Fringe, particularly in Canada, the Fringe!

Curve caught up with several performers at the Winnipeg Fringe Theatre Festival and talked turkey about performing, producing and promoting their own shows in this increasingly competitive theater marketplace.

Susan Jeremy is the Fringer probably the best-known to Curve readers. Brazil Nuts, her one-woman comedy (“Two lesbians walk into a bar. One marries a go-go boy. All three get dropkicked into the Bermuda triangle of U.S. Immigration!”) received mixed reviews in Canada. She decided to try out the show in Montreal, Toronto and Winnipeg before it premieres in the U.S. at LaMama in New York City next April for a three week run.

“I’ve proven myself here and have a following in Canada, that’s why they lined up at my first show,” says Jeremy, “But, the critics are not embracing it as a hit because it’s not a topic they can relate to it, they even said that—too bad it’s not a topic we are interested in. I’m sorry, I thought theater was about learning something.”

Word on the street is that many reviews from the Fringes are tinged with sexism, even those by female critics. Says Jeremy: “That’s why we [female Fringers] stand together—we call ourselves the femme fatales of the fringe, because we get three stars and the guys get five stars…they kill our sales.”

Sherri D. Sutton is a comedian well-known in New York City comedy circles. She’s been honing her craft fulltime for six years. Sutton’s Fringe show, Don’t Make Fun of Jesus, was a runaway hit in Winnipeg, receiving raves from the Canadian audience and most reviewers. She recently married her partner Tara Brodin in Edmonton, Alberta, where same-sex marriage is legal. The couple will relocate there as soon as their emigration papers are in order. Winnipeg was Sutton’s only Fringe appearance this year, but she plans to bring her show back on tour next year, so definitely be on the lookout.

Sutton concurs with Jeremy about Fringe reviews of women, and lesbians in particular. “There are still issues with strong women, women who are gay, women in comedy—it’s still a man’s world in terms of how you are reviewed, how your show is seen. It’s frustrating. You know your craft, your working craft and here’s this 27-year-old guy who’s sloppy and gets the same quality review…You run into comedy being a man’s world. I think it’s changing. Sarah Silverman and Tina Fey have put women in comedy on the map in the past few years, but still you run into it being the boy’s job.”

Inviting Desire hit it big in Winnipeg, too—even male reviewers liked it. A look at ownership of female desire and female sexual fantasy, the play was conceived by Eleanor O’Brien and work-shopped at Portland, Ore.’s Fertile Ground a City-wide Festival of New Work, with seven performers who contributed their own material. “The whole impetus for me is what is it like to put the portrayal of desire on the stage and can men and woman and gay people and straight people be in the same room experiencing a show about sexuality, and what does that do to an audience,” says O’Brien, whose original germination for the play was Nancy Friday’s groundbreaking book from the early ’70s, My Secret Garden: Women’s Sexual Fantasies.

O’Brien and the Inviting Desire crew, a touring company of four women with an hour-long performance, will be appearing at the Calgary and Edmonton Fringes this month.

Amy Salloway, a perennial favorite in Canada, previewed her new work, Heebs and Dweebs, in Ottawa and Winnipeg this year. Salloway, who has been cited by Curve for her pansexual work, Does This Monologue Make Me Look Fat, is headed to Edmonton with her one-woman show, Circumference. According to her publicity material, the show “pits the Ghosts of Gym Teachers Past against the Obsession with Weight Loss Future in this mostly-true comedy about size, sweat…and exercising your demons.”

Playwright and monologist Lisa Haas is finishing her year-long tour of Crown Hill Cemetery in Vancouver this September. Haas will be back on the Fringe circuit next year, hoping to debut her new solo show, The DPB Scandal, a dark comedy about good people with bad secrets at the Orlando International Fringe Theatre Festival next May.