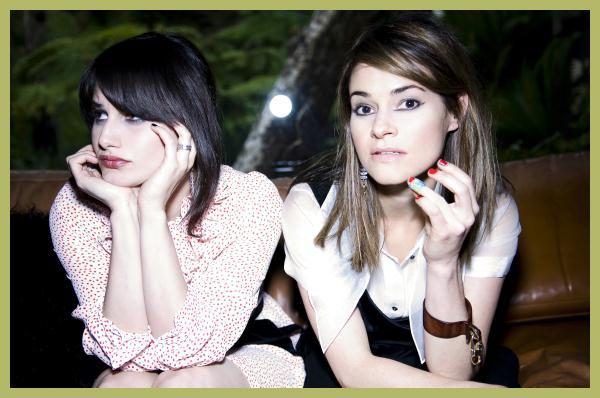 Camila Grey and Leisha Hailey better known as musical duo Uh Huh Her divulge the secret behind their musical partnership and their upcoming gig at The Dinah.

The year was 2007 and Leisha Hailey was riding a wave of popularity playing character Alice Pieszecki in Showtime hit, The L Word. You’d think the world couldn’t get any more peachy for the actress, but Hailey, who had made up one half of by-then-defunct jangly guitar girl group The Murmurs must have been feeling a musical itch that needed a big long scratch.

After meeting bassist Camila Grey (The Mellowdrones) through mutual friends, that itch was about to be satiated and new indie electro pop outfit Uh Huh Her was born. PJ Harvey fans will instantly recognise the moniker – a nod to the singer’s 2004 album of the same name.

Remarks Hailey: “I called Camila to ask if she wanted to meet and talk about the possibility of starting a band. We got together, talked about our different influences and pretty much started forming UHH that week.”

The pair’s creative juices must have been flowing at the rate of knots. By July 2007 they had released their first EP, I See Red, and already had a growing fan base.

Perhaps the speed of this first EP could be marked down to the pair’s creative process which seems complementary. According to Hailey they usually start the writing process alone.

“Each song has it’s own process. Cam writes alone, I write alone, we start together from scratch. Lyrics always come last for me. I’m driven by melody first.”

Grey who has a strong background in theory is slightly different.

“Music always comes first,” says Grey. “I come from a very compositional background.  I started out writing instrumental classical music believe it or not, and then those kind of turned into pop songs later on. I usually start with a beat and layer over that all the other parts in my head. I always make the song in one fell swoop, stream of consciousness style.”

The pair both concede that the Uh Huh Her Sound which had a strong indie pop flavour has evolved over the past five years. “I think we have incorporated more of what we both love into our sound with each record,” says Hailey.  “I am very influenced by beats and heavy grunge power chords and Cam is very electronic and 80s driven. I think our next record will combine those even better.”

Grey agrees: “I think we’ve gotten way more experimental and are willing to try new things as opposed to staying in this ‘Electro’ box.  We were doing Electro Pop in the early days and now I feel like everyone has an electro throwback band.  That said it’s better than boy bands dominating the market.  Oh wait, I love One Direction. They can stay,” she laughs.

Both would say they write from a very personal place. With Grey adding, “while we will always take from our own personal experiences, however I love to write from other perspectives. I like to make believe still, which is a good thing…”

The bassist turned singer cites musical greats such as Chrissy Hynde, Dave Gahan and Thom Yorke as ‘big influences”, saying “I love how Chrissy was this tough rock chick (still is) in a very male dominated rock scene back in the 80s.  I love her look and her attitude to this day.  As far as Thom and Dave, I feel they need no explanation.  They are just pioneers of a new sound in general.”

As for what’s next for the musical duo, Hailey says the rumours of a dance album are true and admits that the pair have just started writing tracks. They are also set to appear as the headlining act at The Dinah In Palm Springs this April. It’s the third time the girls will be appearing at the annual event. For Grey, playing at the Dinah is a highlight as she believes the event “represents freedom of expression and a place where women can come together safely and have a good time”.

Meanwhile Hailey says her favourite Dinah memory comes from “watching Katy Perry when she first started and Cam tugging on her hair backstage and asking her if it was a wig,” she laughs.