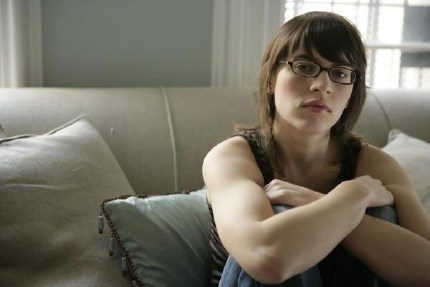 Kaki King is a contrary creature. Her latest album  Junior is testament to this characteristic, running the gamut from experimental pieces to accessible pop. Lyrics range from the heartbroken and forlorn to the downright nonsensical and King fans will no doubt be  scratching their collective heads at the more stripped back production, yet there’s still the unmistakable Kaki sound and the songs, as always, linger in the mind of the listener.

Described as a virtuoso guitarist, King is reluctant to take on the mantle of instrumental genius despite the accolades from magazines such as Rolling Stone or musicians like Dave Grohl. In fact to hear the singer tell it, she and her guitar share a rather fraught relationship.” I play it like I want to beat the shit out of it,” she muses.

”I think me and the guitar are almost like siblings. In a way I’ve grown up with it. I’ve lived with it, I’ve dealt with it, it’s fucked me over, I’ve fucked it over. We’ve known each other so well, we’ve wanted to completely forget about each other, we’ve broken up and we’ve got back together –it’s like a relationship. The guitar is part of my identity now. It’s like a tattoo I have that I’m not sure how I feel about.”

So how did this relationship begin? Like most middle class children Kaki remembers having an instrument forced upon her as a kid. ”My dad is a music lover – so we were made to play an instrument. When I was five years old they made me play guitar and I hated it. These days I wouldn’t say I love it – we have more of a mutual respect…”

…The guitar is part of my identity now. It’s like a tattoo I have that I’m not sure how I feel about…

Love it or not, King’s extraordinary talent has taken her all over the globe, playing music for fans in Australia, Japan, Europe. It’s a job she feels lucky and grateful for… although admits she took up playing music for a living quite by chance… ”It’s definitely not about money – it’s just that I wouldn’t want to do anything else. What would I do at home? Sit on my arse and do shit? It’s a great life – but it doesn’t mean it’s perfectly peachy – but I’m always fascinated by it.”

Meanwhile King’s music continues to appeal to a vast number of people- her fan base stretches from 80 year old music aficionados to angst ridden teens to many music industry heavyweights. ”I’m a musicians musician,” she shrugs.

So why doe her music appeal to such a cross section of punters?

”I don’t know – sometimes I’ve wondered about that. I think its because … the instrumental stuff people feel they can tell their own story to and the lyrical stuff has universal themes. Love and loss and confusion. I think that people can interpret things for themselves and their own lives the way they want to.”