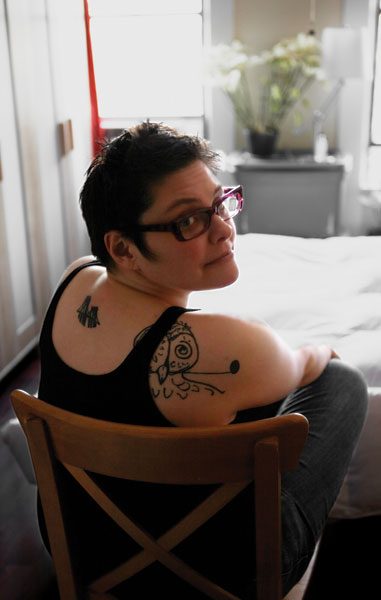 How one lesbian fought mental illness and lived to tell the tale in her new memoir Beautiful Wreck: Sex, Lies & Suicide.

One of the first things you notice about Stephanie Schroeder is that she’s not crazy. Centered, focused, funny, with a soupçon of self-deprecation, she tells her story of mental illness, attempted suicide and a late-in-life diagnosis of bipolar disorder with a wry honesty and humor that supports, rather than belies, her success in dealing with the struggles she’s been through.

In her newly released memoir, Beautiful Wreck: Sex, Lies & Suicide, Schroeder tells the harrowing tale of her spiral into severe, debilitating, suicidal depression. And while that story may seem like one we’ve heard before, it isn’t.

Schroeder is a lesbian and she isn’t just revealing the brutal and painful details of her own life—she’s illuminating a larger picture: the sometimes toxic lesbian community in which boundaries can be virtually nonexistent and women regularly mistake the abusive behavior of their partners for eccentricity or, what’s worse, the norm.

The background to Schroeder’s experience is all around us, but written in invisible ink. We hear a lot about the most extreme cases of mental illness in America: the Dark Knight killer in Aurora, Colo., the man who shot Rep. Gabby Giffords in Tucson, Ariz., the mass murderer at Virginia Tech.

These killers all suffered from untreated mental illness so severe that it provoked a psychotic episode. More often, though, people with mental illness seem basically okay, capable of going to work and living life day-to-day while they try to cope with depression, anxiety, or more.

According to the American Psychiatric Association (APA), one in ten Americans battles depression and one in six battles some other form of mental illness, chronically. The origins of schizophrenia and bipolar disorder can be genetic, although not everyone who suffers from these illnesses inherits them.

Many mental illnesses, such as ADHD (attention deficit hyperactivity disorder) or OCD (obsessive-compulsive disorder) begin in childhood. Others appear later in life, and in recent years the APA has indicated that depression is a leading killer of older Americans; As many as half of all people over 60 suffer from severe depression.

Suicide spikes in people over 60, as well. Psychotropic drugs are now the most frequently prescribed medications, after antibiotics and drugs to lower cholesterol. Yet despite the fact that mental illness impacts more Americans than diabetes or cancer, people with the disease are often ignored, ostracized, or marginalized.

More than most people with mental illness, Schroeder seemed almost hyper-normal. Good job, stable relationship. She was attractive and fit, living what could be called the American Dream. But in reality, she was living a nightmare so inescapable that  she tried to take her own life. More than once.

Beautiful Wreck is a difficult book to read, especially in the beginning. Many lesbians will start to feel a gnawing discomfort as they read about Schroeder’s high-powered and controlling partner, Lauren, who demanded that Schroeder share everything with her, whether she wanted to or not. This included compulsory gym attendance, dietary restrictions and eventually even a child.

The memoir will resonate with many lesbians because there are so many Laurens out there—attractive women who seem to have it all together and who lure partners in with the promise of a perfect mainstream life.

One of the ways women coping with mental illness are often dismissed in the lesbian community is by being labeled “drama queens.” “Lesbian drama” is a term used for domestic conflict, and often inappropriately. In just this way, a book like Schroeder’s might be dismissed or misconstrued by some. But Schroeder thinks she is on to something much more important.

“I sometimes think about how I used to live in chaos and crave drama to mask other feelings, and this book bears that out, certainly. I’ve chosen to currently live without drama, lesbian or otherwise, and pursue a healthy life that includes a healthy intimate relationship with another woman, but people who have read the book all relate to it in the way I intended: They see parts of themselves in my story.

They relate to depression, mostly, which is a total epidemic. Many people relate to the intimate-partner violence—even straight men who have read it tell me about abusive partners.”

Beautiful Wreck is often painful and disturbing, but Schroeder says she was compelled to write this memoir.

“Something as personal, difficult, and disturbing as what Beautiful Wreck turned out to be, as a book, was all I could write,” she explains with characteristic honesty. “It’s the truth, it all happened, it happened to me, and I wanted to write about it. I’m a writer and I write about people’s stories all the time. And mine is a damn good story to tell.”

Schroeder details how when she first began the book it was “very cathartic,” but she explains—and laughs a dry, uncomfortable laugh as she does so—that she started writing the book when she was with another partner, Mel, with whom she’d become involved as a way to escape the abuse she’d experienced with Lauren.

“Go figure. And I left out so much because I didn’t see what was happening right in front of me, and it was ongoing and happening while I was in the process of writing it.”

Schroeder wrote the core of Beautiful Wreck in a writing workshop. “I kind of just churned it out, so I could meet the workshop deadline.” What was happening right in front of her, however, was the phenomenon in which lesbians believe what others—even those closest to them—tell them to believe about themselves, that we are less than who we really are.

When Schroeder was writing Beautiful Wreck, she recalls, “Mel called [the workshop] my ‘reading group,’ as though my writing wasn’t a serious undertaking. Lauren also didn’t take my writing seriously. Neither of them would read anything I wrote, even my journalism.”

As painful as that knowledge must be—that these two women with whom she was partnered ignored her life’s work—Schroeder is currently in a satisfyingly healthy relationship. She’s feeling good about it.

And it’s “not just the sex,” she laughs. About the other women, she has nothing but well-placed and well-deserved vitriol. “They were horrible, abusive, cruel people,” she says, the pain in her voice clear. “They were bitches. And you can quote me on that.”

While it seems likely that her former girlfriends will not read the memoir, Schroeder anticipates that telling her story will impact the people around her. Schroeder notes that her family has always been supportive, but that she was afraid that her mother, with whom she has had “really rough times,” might have trouble with it.

“What did my mother say after reading my manuscript? Well, she said it made her profoundly sad that I had to go through all of that shit, and that she had contributed to some of it.”

Schroeder’s father thinks she “let him off easy.” Her sister has been especially supportive, and “loves the book.”

As for most of the folks mentioned in her book, Schroeder says, “No one’s come out of the woodwork yet,” adding that she has no desire to see them again and hopes that she doesn’t. Her tone is fearless.

“I don’t want to have to deal with any of them. They made my life miserable and I really don’t want to have to see them or talk with them ever again. They were horrible to me, very disturbed people, and 10 to 20 years later, I’m over it. But I’ll take them on if I have to,” she adds, defiantly.

As Schroeder explicates the journey she’s been on, it’s apparent how difficult, painful, but ultimately revivifying it’s been for her. The self-awareness and self-revelation weren’t easy to come by, but the learning process propelled her into a new life—diagnosed, treated, and, most importantly, alive and well, despite three brushes with death, the last of which she almost didn’t recover from.

But Schroeder doesn’t let herself off the hook either. She explains that she was moody and irritable, angry and rage-filled, and that she probably attracted, or was attracted to, both of those abusive women. She also notes that she had a lot of people to apologize to, after she was diagnosed and on medication.

She’s not worried about getting any backlash for being honest. She feels strongly—and her personal strength comes through, both in talking to her and in reading her work—that she has to be honest, above all.

“One thing I want to say about backlash—or any other repercussion—is that I don’t give a shit. Not in a careless or reckless way of not caring,” she clarifies. She wants people to see her and other mentally ill people as essentially the same as everyone else. But she is quick to add that she “doesn’t much care what other people think,” and she hopes that’s one thing people will take away from the book.

“Don’t worry so much, or at all, about what people will think.” Schroeder explains. “It’s what keeps us bound in abusive relationships—personal, professional, and political. Worrying about what the proverbial neighbors will think is what keeps people in their place—it paralyzes people, keeps apathy and ignorance in the political arena alive, and makes people physically ill.”

As for Schroeder, she intends never to let that happen to her again. Her scars remain—you don’t spend time in a locked ward, after nearly dying, and come out unscathed. But today Schroeder is happy to be alive. And her intense, honest, wry, and raw memoir explains and explores what it took to get where she is now—and what it will take to keep going forward with her life.