An Unforgettable Memoir Of A Fascinating Life!

It’s no surprise that comedian, D’yan Forest’s seductive tales are as much about love, family, romance, divorce and estrogen as they are about sex.

But make no mistake, there’s sex.

On several continents, with great variety for 6 decades. D’yan came of age when a girl could go one way, the other way or both ways and she was curious.

Compared to the sexual choices one has today, “both ways” sounds absolutely quaint, which is also a good description of the book. This joyful and humorous memoir is one nice Jewish girl’s journey from innocent music student to educated, bilingual, worldly entertainer.

As a child in Boston during World War 2, she grew a victory garden while also witnessing American antisemitism of the forties and fifties. Shortly after graduating from college, she discovered she wasn’t “wife” material. 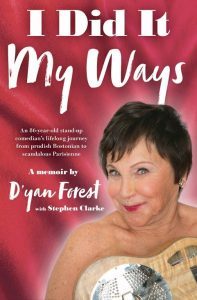 Unfortunately, she was married when she made the discovery. She moved on and like her mostly male counterparts in 1960, she set out to see the world and that’s exactly what she did.

And we get to go along. There’s nothing like finding out what you like by trying everything! Pack light and enjoy the trip!