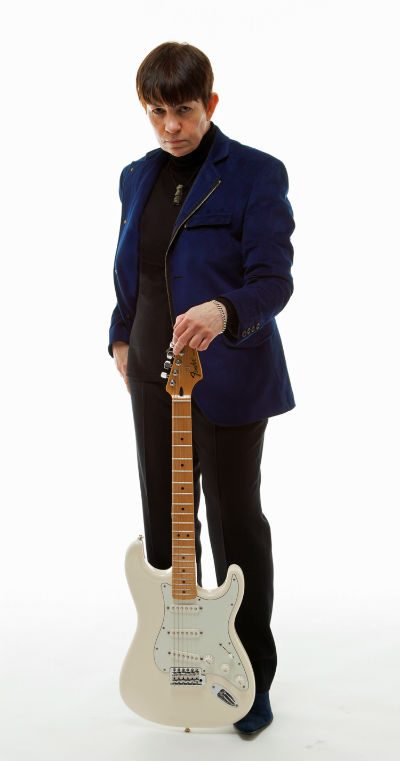 I never understood the gender difference.

At age 61, long-lived lesbian Susan SurfTone (legally Susan Yasinski) is trying something new. After nearly six decades of experience playing guitar, performing, and recording albums, SurfTone has picked up a mic for the first time, recording the vocals for her new CD, The Magician. Starting to sing professionally in her sixties means taking risks, but SurfTone is used to those.

The Portland, Oregon-based singer/songwriter had a musical childhood, which led to writing and performing surf music in a band, which led to singing on her own CD, and on the way she worked for the FBI.

From the beginning, SurfTone’s approach to music was nontraditional. “My family on my maternal grandmother’s side was somewhat musical, not professionals, but they liked to dance and sing. My mother was born in 1927, so her music was the Big Band Era, the 1940s, but she really liked rock. She was a big Rolling Stones fan, especially of Mick Jagger. I’d often hear “Oh, that Mick Jagger!” And she liked Elvis.”

“I was an Elvis Presley fan. My mother took me to see Jailhouse Rock when I was three. I guess I thought, like John Lennon, that that looked like a pretty good job. I bought my first Elvis record at seven. I got an old tennis racket and I’d go around the house playing it like a guitar, playing Elvis songs. I’d turn my collar up and do the lip sneer, the whole thing. I was a little boy being Elvis! I knew I was a little girl, but I was being myself. I never understood the gender difference, frankly. It never stopped me: I never thought, ‘I’m a little girl, I can’t do this.’ I identified strongly with Elvis and the Beatles, all male performers.”

“When the Beatles came over and went on Ed Sullivan, that was the greatest thing in the world, these four guys doing it all themselves. I liked them all, but I liked George [Harrison] best because he was the lead guitar player, and I wanted to be a guitar player. And he was quiet, and I was quiet too. I didn’t sing at that time. It took me a long, long time before I sung, till I was sixty-one!”

“Then when Janis Joplin came along, I thought, ‘Wow, there’s a girl up in front of a band!’ Before, in my recollection, there weren’t any other women singers who were not dressed up in a little dress, with hair piled up on her head, and heels and everything. Janis was a woman really fronting a band, finally. I read later about all the trouble she had doing it, but at the time, there she was.”

SurfTone did her undergraduate work at Smith and then went to Boston University School of Law, but in those years she neither played in a band nor came out as a lesbian. “When I was at Smith College, in the 1970s, my first three years we were very quiet about being gay. It was not easy to be openly gay at Smith. We were there, in numbers, and the college knew it was an issue, but they were wrestling with how to handle it. I graduated in 1976, and by the time it was my senior year it kind of exploded. A bar downtown was having “gay nights,” and one of my friends and I went to the gay night, and when we walked in, there was another woman from our house [campus dormitory], and we didn’t even know she was gay!”

Like girl rockers? Send comments and suggestions for interviews to: [email protected]