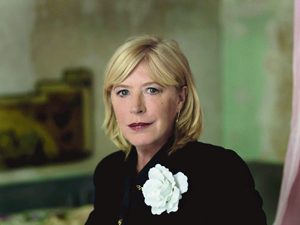 In 1964 Marianne Faithfull became a star in her native England at the tender age of 17 when her version of the Mick Jagger-Keith Richards ballad “As Tears Go By” became a hit.

Though she dented the UK charts a few more times, Faithfull felt increasingly limited musically, as writers and producers had her record schmaltzy songs in an effort to duplicate her first success. By 1970, Faithfull was in trouble—not just musically but personally.

In addition to her career problems, she had developed a legendary drug addiction, weathered a tumultuous high-profile romance with Jagger, endured other affairs with both men and women, suffered a miscarriage and survived a near-fatal coma. By the mid-’70s, Faithfull had basically been reduced to “where-are-they-now” status—and this was all before she turned 30.

Faithfull bounced back into the limelight with 1979’s Broken English. The album contained only eight songs, but each one was a winner. In the 30 years since, Faithfull has weathered even more crises, including breast cancer, but she has recorded fairly steadily, often to great critical acclaim. Faithfull’s covers album, Easy Come Easy Go, reunites her with esteemed producer Hal Willner. Here’s how our chat went:

There’s two things I really look for. One is story-songs. And the other is songs that create an atmosphere.

Keith Richards joins you on the last song on the album, “Sing Me Back Home.” Do you work with Keith regularly?

I do. We did a Patti Smith song and I dedicated all the proceeds from it to an AIDS charity. We recorded it in Dublin, it’s called “Ghost Dance” and it’s fantastic. I work very well with Keith.

In the ’60s, you had relationships with both men and women.

Back then, was there a need to keep same-sex relationships a secret? Has that changed over the years?

I don’t really do it anymore. It was something I did when I was young and it was a lot of fun. I would say I’m bisexual.

Do you prefer touring to being in the studio?

Part of the success of Broken English was your voice, great musicians, great songs. But what about the punk movement’s influence on the album?

The punk movement really inspired me because it was stuff that I could understand, just getting out there and doing it. I think just before the punks, I [was] intimidated by the grandiosity of the music. It was very strange. It was all like Yes; even Led Zeppelin got very grandiose. I couldn’t relate to that. But when the punks came, I thought, “This is the moment to make my great record.”