Sisters in the life, and in real life, Cathy Henderson and Kristen Ellis-Henderson raise their glasses to marriage equality and their latest single about whiskey.

“We’re both standing on the same porch right now on Long Island near the beach,” says Cathy Henderson. Cathy and her sister Kristen are native Long Islanders and say they’ve lived together most of their lives. “But now we live only a hop, skip and a jump from each other,” says Kristen.

Founders of the all-female rock band Antigone Rising, Cathy, who plays lead guitar, says that her sister Kristen, who plays bass guitar, returned to their roots when she and her wife Sarah Kate Ellis decided to have children. Cathy followed soon after.

The success of Antigone Rising’s is not a typical rags-to-riches band story—at least not in riches as they are traditionally defined.

The formation of the band, and its evolution, began at Bucknell University in Pennsylvania, which both Cathy and Kristen attended. “When we were there we met  [Penelope Kokines and Suzanne Obolsky] who formed Antigone Rising. When we moved to New York City, we played small venues up and down Bleecker Street,” says Cathy.

Back then the band was more of an acoustic quartet, and the lead singer decided to get married and move to Boston. “She missed the train as it was pulling out of the station,” Kirsten laughs. “This was around 1989, and within two weeks we landed a gig at Lilith Fair where we had a transitional lead singer. From there, our current story began, with shifting members, and figuring out how it was all going to work.

We met everybody in N.Y.C., in the clubs, including Nini [Camps], who is now our lead singer.”

With the charismatic and energetic front woman Camps, and Dena Tauriello bringing up the rear on drums, Antigone Rising morphed into a full band capable of producing a big rock sound but incorporating the pop, folk and country elements that lesbians love. “We signed a contract, jumped in a bus, traveled around the world, and are now back on Long Island,” says Kristen.

But their latest release, the irresistibly toe-tapping, tongue-in-cheek, alt-country tune “It Was the Whiskey” was born from life on the road.

“We were down in Florida at the 30A Songwriters Festival,” recalls Cathy. “It was a Saturday night and the Bangles’ Vicki Peterson, along with Lori McKenna, Garrison Starr and Michelle Malone were all in the audience. It was Nini’s birthday and we had a prime slot, playing in a roadhouse bar.”

“There was a magical thing going on up and down the Emerald Coast on Highway 30A,” says Kristen, picking up the story’s thread. “Every venue becomes a live music venue, with no traditional stage. For instance, you walk into the bagel shop and Lori McKenna is playing or at a nearby coffeehouse you see Mary Gauthier. 30A is a trippy festival that is totally magical,” says Kristen.

Antigone Rising was the final show of Saturday’s schedule. “The old roadhouse bar lent itself to the spirit of debauchery,” says Cathy. “It was electric—on fire. Everyone from the festival gathered at the bar. Lori McKenna, who more than anyone knows us from writing, which is on a different level than touring with Garrison or Michelle, was in the audience, but we didn’t know it. Garrison was on the side of the stage and Michelle was hooting and hollering in the audience. It was just amazing.” 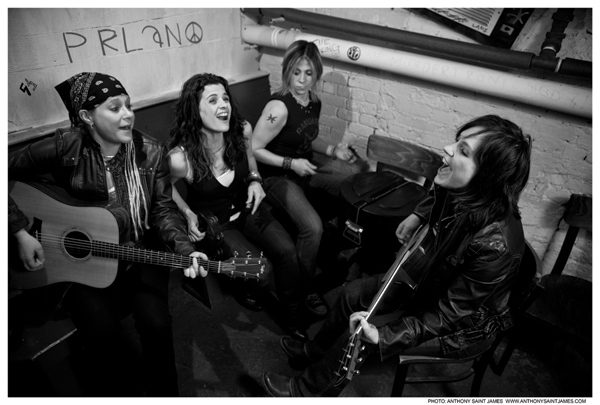 “It Was the Whiskey” was co-written with McKenna loosely based on that night and the band is making a video to accompany the song.

Back home on Long Island things are quiet now. Kristen and her wife Sarah Kate were celebrated at a national level when a photo of the couple kissing was selected as the cover for TIME magazine’s issue on marriage equality in March.

“That came about because my wife and I wrote a book, Times Two: Two Women in Love and The Happy Family They Made back in 2009, when marriage equality didn’t pass in the New York Senate,” says Kristen. “Then, with DOMA and Prop 8 coming up in the Supreme Court, TIME remembered us from the book and we were asked about coming in to discuss DOMA. They asked us if we would also do photos, including kissing. That phone call was on a Friday at 9 p.m. and we were in the TIME offices on Monday morning at 11 a.m.”

The two women didn’t realize the photo would be used for the magazine’s cover. They weren’t even sure any photos would be published at all. “Wednesday afternoon we got a call that there would be a split cover, one with two gay men kissing and another cover with us,” says Kristen.

Kristen is used to media attention since she and Sarah Kate, then working as the marketing director at Real Simple magazine, got pregnant on the same day and the publication ran a Mother’s Day story about them, which led to their book deal.

Family is at the core of Antigone Rising. Cathy loves hanging out with her niece Kate and nephew Thomas. (The Hendersons also have a brother with children). “I absolutely knew I would be a professional aunt. But, that is as far as it goes. I am a big kid, I love running around like crazy, and then leaving them with their parents,” says Cathy. “That was my plan and I’ve stuck to it.”

The band balances child-rearing with writing, and Nini has a studio in her house, which—of course—is around the corner from the Henderson sisters on Long Island.

“Nini has a kid in pre-K with our kids,” says Kristen. “We drop the kids at school and run back to the studio to record from 8:45 a.m. until noon. Then we pick up the kids and go to the park. That’s how it works now, but we get it done.”