The lesbian filmmaker scored at Sundance, broke bread with Robert Redford, met a seriously iconic artist and now is thinking ahead to her next several projects.

Erin Greenwell, writer/director of My Best Day, which just premiered at Sundance, is flying high — and who can blame her? Her feature film sold out before she (along with various cast and crew) even arrived in Park City. And, with an amazing review in Variety, the holy grail of entertainment publications, the wintery film fest has been abuzz with Greenwell’s success. Curve nicked an interview with the talented Greenwell.

I teared up a bit when I read your Filmmaker blog post about Robert Redford’s influence on you from a young age and knowing you wanted to tell stories on film. How did you actually get started making films?

I had the good fortune of studying Dramatic Writing/Screenwriting at NYU’s Tisch School of the Arts. Upon graduation, I grew impatient trying to get my scripts read by production companies. I started learning digital cameras and editing so I could self produce and direct my own ideas which grew from short skits, to shorts to features.

Who are your influences?

Would you believe it? Martin Scorsese is one of my favorite directors. Billy Wilder’s Some Like It Hot was a comedy that changed my world as a young kid. More than favorite directors, I often have favorite moments from movies; where the technique and story is so mesmerizing I forget to figure out how it’s made. Also music opened my world growing up. Music made me feel I could go anywhere and do anything. Lauri Anderson was a big influence but then again so was Led Zeppelin. If it spoke to me, art made me feel I wasn’t alone.

What, or who, at Sundance (besides Robert Redford) completely blows your mind?

Truth be told, we went to less movies than we’d like because we were so busy. There was a fiction short I saw called Random Strangers that was about two people who meet through ChatRoulette and you see their relationship develop through the computer screens’ perspective. I found it so powerful. I was awe struck washing my hands next to artist Marina AbramoviÄ‡ who shot me a winky “Relax, I know you know who I am” smile in the mirror before leaving the restroom.

I’ve gotta ask not only about being a female writer and director but also a lesbian filmmaker. How does this impact funding?

I’ve always been in a strange financing place because I typically write comedies that include queer characters. Investors in the industry will ask “Why lesbians?” Then I apply for grants that support LGBT filmmakers and the question is “Why comedy?” So I’ve often had to rely on creative producing and diverse arms of support. 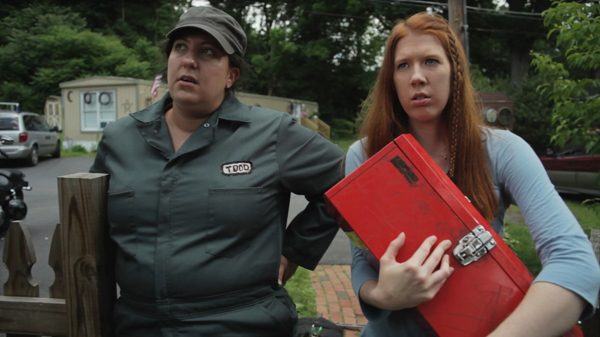 My Best Day has a lot of lesbian characters, but is it a “lesbian film” and are you a lesbian filmmaker or a lesbian who make films – or both?

Depends on the viewer. I’ve had people say it’s a queer film. Others say it’s about class. Others say it’s about simply being different. Others say it’s a straight up ensemble comedy. This makes me happy because it means the movie is accessible even though I made it through a personal and uncompromising perspective. Along the same lines, I am proud to be a lesbian filmmaker because it is tough to gain support and visibility in the entertainment industry, so if someone asks- Hell yeah I am! But I of course want to be known simply as a filmmaker who continues to get bigger and badder.

Will you discuss being a feature filmmaker? This is your second feature and you’ve also made shorts, such as Overnight Book, one of my all time favorite short films. Where do you get the budget for a feature vs. a short?

This is my second feature. Mom aka Big Dreams in Little Hope was my first. I also made a featurette which did well on the LGBT festival circuit called 21 that put me on my way. Overnight Book was a thesis short to fulfill my MFA in Directing Film but I had already made Mom. Ironically enough Overnight Book was more challenging because I was digging deeper emotionally (it was autobiographical) and thinking more cinematically. While in grad school I also had to make a 1-minute documentary for a class about the death of my father. That was harder even than My Best Day. Growth comes from being honest and vulnerable. Length and budget is secondary.

What is next for Erin Greenwell?

I am writing two scripts (plot under wraps until they gets some engine on ‘em) that I will direct, editing a feature in the spring and producing a music video. Sundance raised the bar. You look around and see all these filmmakers making their movies. Some with a lot more support and some with even less than you. The market place is so competitive but you realize all your peers are fueled by making movies no matter what. There’s no excuse to simply not keep making movies. Worry about the rewards later.