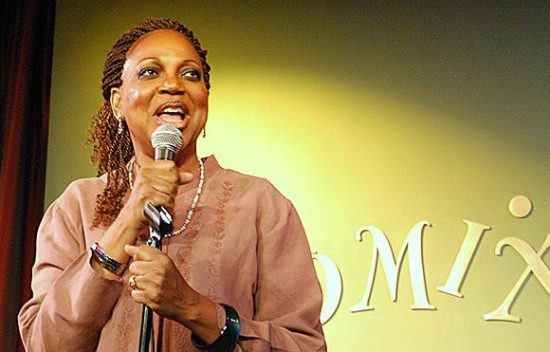 Stand-up comic and inspirational speaker, Karen Williams, shares her power with the people (while cracking them up).

Karen Williams has been performing stand-up since the 1980s, and she isn’t slowing down. I caught her just as she was about to run out the door for a night out on the town with one of Bob Marley’s former backup singers, Sister Carol.

Williams certainly deserved a night off. She had just hopped off the boat from performances on an Olivia cruise through Scandinavia, and was busy planning three birthday parties, all on the same weekend and all her own, with one benefiting the local LGBT center near her home in Cleveland, Ohio.

We caught up to talk funny business, the power in laughter and just who she met at a Black Panther meeting when she was a teen.

When you’re not performing comedy you’re hosting motivational seminars at your Haha Institute. What do you teach people there?

I’ve been interested in power dynamics all my life. What causes people a great deal of stress, anxiety and pain are power dynamics that are abusive. So whether it’s in the family or work dynamic, or however it’s manifesting, people get very uncomfortable with power. The reality is that you have to have a sense of your own personal power to have an impact.

What do you teach people about their own power and how is power connected to comedy?

I have a lot of confidence that people want to be happy, and that they’re hopeful the actions they take will bring them towards their happiness. [The Haha Institute] is like having a guide along the way.

I tell people, “Maybe if you try this it might work better than that,” or, “I think you can do this,” and, “Let’s laugh about that.” For me, the power of compassion, the power of kindness, the power of empathy really resonates with my life and I think that’s a lot of what I’m sharing with people.

You’re in your 40th year of practicing Buddhism. How would you say Buddhism has influenced your comedy?

Prior to practicing I was just having angry responses to the abuses that were taking place, whether they were cultural in society or whether it was personal. For women in particular we don’t have a lot of outlets for our anger so a lot of it gets turned inward.

I was definitely on that path where my anger was being turned against myself and that’s not productive. People say when I first started performing I was so angry.

And I don’t take offense to it. Yeah, I was angry. There is shit to be angry about, but I don’t want to be so angry that I can’t take constructive action.

Would you count your stand-up as a constructive action?

I credit two things for my own salvation: the chanting related to the Buddhist practice I do, and the craft of comedy. They gave me an outlet for expression of that pain and anger.

I could see that there was something wrong. I was wondering, “Does anyone else see it? If they see it how come they’re not speaking about it?” Without [chanting and comedy] I would’ve just imploded. Fortunately there’s a lot of self-discovery in the process but I also had really good teachers

Both in Buddhism and in comedy?

In life. When I was 14 I remember going to a Black Panther meeting in Brooklyn and seeing Kathleen Cleaver.

A beautiful, articulate, brown-skinned woman talking about rights and peace and empowerment. I was like, “Wow, who is this?” At 14!