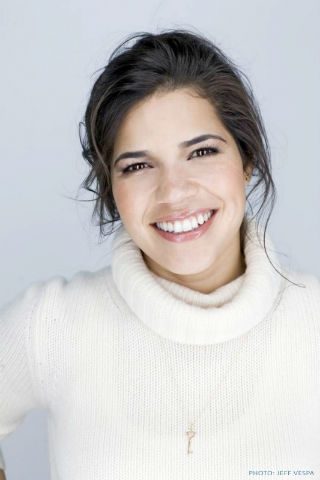 The star of Ugly Betty speaks out on behalf of minorities.

For many the thought of enrolling in health care coverage via the Affordable Care Act (ACA) is nearly impossible to imagine. Many in the Latino community, specifically, fear for the safety and security of their family members, and the threat of deportation is a heavy burden to bear. But what if that threat was taken away? What if all of a sudden the immediate danger dissipated and you were suddenly allowed to care for yourself and your dependents without the worry of being given the boot? Would you do it?

“I am here on behalf of all Americans who are tired of the House of Representatives and its leader’s refusal to act,” Ferrera said. “We are demanding a vote for the young dreamers fighting for the right to a future in the only country they have ever called home.”

Ferrera is the daughter of immigrants.

“House leadership, every day that you refuse to act is another day 1,100 families are torn apart by senseless deportations,” Ferrera said. “So we are here demanding a vote for the families dreading that knock on the door hoping and praying that they will not be one of the 1,100 today.”

“It’s not enough to simply declare your support for immigration reform,” Ferrara added. “It’s time for those 34 House Republicans to act on their word by forcing a vote on reform. We will not accept your excuses for delay.”

Ferrera’s passion is warranted, but on the topic of affordable access to health care, her argument is neither here nor there. Let’s take a step back.

On Monday, March 24, President Barack Obama emphasized the separation between obtaining health care coverage and being targeted by immigration services. He said in an interview with the Spanish-language network Univision: “The thing that I’ve really been trying to emphasize is, you are eligible if you are a U.S. citizen, or you’re a person who’s legally here.  And just because another family member does not have documents, they cannot sign up for health care, but there is no sharing of this data or information with, you know, immigration officials. And so I don’t want people to be discouraged from going ahead and getting health insurance, even if it’s just for some of the members of their family. They need to know that immigration will have nothing to do with this process.”

What’s difficult to reconcile in this situation is the mistrust ingrained in this community as a whole. The government is attempting to offer a valuable service, but the disenfranchised are seemingly unwilling to budge…and can you blame them? One might call the Latino community the “unreachable community,” and not for lack of trying. The United States of America was built by immigrants for immigrants, and somewhere along the way the collective “we” began deporting our brothers and sisters when the paper trails didn’t add up.  Legality is important, and so is working to rebuild trust.

A successful Affordable Care Act response in the Latino community will occur when all Americans feel represented. Until immigration is indeed reformed, the inequality within minority communities is outstanding to document, and needs to be relieved.

In the meantime, there are millions of Americans without affordable health care coverage—and that needs to be remedied, too. March 31, 2014 is the last day of open enrollment until November. Here’s how you can join: https://www.healthcare.gov/contact-us