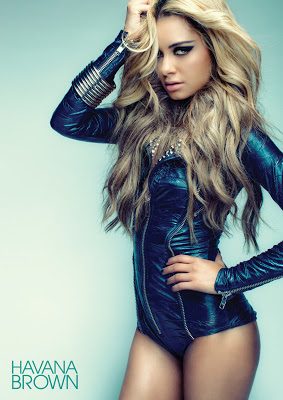 Havana Brown dishes on what it’s like being an Aussie in the U.S. music scene, her love for performing and why she’s excited to perform at The Dinah.

Each year Curve presents The Dinah's White Party, the largest Friday night party for women in the world. This year will be no different. On Friday April 5 we'll be hosting The White Party in style. We'll kick off at 8pm at the Zoso Hotel with our Curve VIP Party starting at 9pm, followed by celebrity arrivals along the red carpet at 10pm. Headlining The Dinah White Party is Aussie Havana Brown, known for her breakthrough single "We Run The Night," featuring Pitbull.

We got to chat with Brown about what it's like being an Australian musician in the U.S., her love for performing and why she's excited to perform at The Dinah's White Party.

Being an Aussie, how is it different being a musician in the States compared to Australia?

It's very much the same. The only difference is size. The size of America is unbelievable. And when you come over here, the record companies are like, okay, let's go visit the radio stations and introduce you to the radio stations here. That's when you really realize how big the country is. I mean I've always known, but just to reach those little towns and cities in the middle of America, to reach there, it's not that easy. It's harder to – I guess, penetrate throughout the whole of the U.S. In Australia, it's much smaller, much smaller. It's a longer process here.

You've been DJing and making mixes of other people's music, and now you're creating and releasing your own music. Does that process feel more personal?

How has that process been now that your music has been out for a while and people have been interacting with it?

The first time I was going to play my own original music in my DJ set, I was petrified. I didn't really think that I would be that scared. I mean obviously I knew that I would be excited, which I was, but at the same time, now I'm revealing myself. I'm revealing so much more about myself, and I'm putting myself out there now to be judged even more (laughter). It's a scary thought, but now all I want to do is play my music. In my sets, I'm playing stuff that isn't finished. I'm playing stuff that I've been working on with other DJs, like Afrojack. I'm testing it out and playing it in the clubs. I just want to see the reaction, and I love that. You just know what you need to change about the song, whether it needs certain things in the production, or the lyrics or melody. It's a great feeling to be able to do that. I'm so very fortunate that I can.

As a DJ you've toured with singers like Britney Spears, Rihanna and The Pussy Cat Dolls, how does it feel to perform your own music?

I enjoy being able to DJ, but then to get up and perform and sing my songs and have people sing along with me and know the songs and be excited – this latest track that I released just recently called "Big Banana," it was the first number one on the dance billboard chart this year. And seeing people rock out to my shows with big banana t-shirts in big banana outfits, and also making me banana necklaces and bracelets, it's just unbelievable the response that you get from a song and when people connect with you on another level.

Performing is one of your favorite aspects of being a musician, what about performing do you love?

There are so many things. I get to get up on stage. Beforehand, you feel the nerves, you feel a little bit scared. And I love that fear because when you get up there your adrenaline is racing, and then you get up on stage and you start to entertain and people are dancing and singing and laughing and smiling – and [you're] making people happy. And I feel that connection with them. And sometimes that hour that I may be djing or performing, for that moment, I feel very close with the crowd. I feel like I know every single one of them. And then you get off stage and you've had a good time, and you barely remember what happened, you know what I mean? Because you've just enjoyed every single second, which is fun. I love letting loose like that. I think the stage is probably where I let loose the most.

Having fun and going crazy definitely sums up the crowd at The Dinah.

Well it's a celebration, and everyone is there to just have fun. You're not there to have business meetings. You're there to fricken let loose, aren't you? (laughter) [You're there to] drink, party and enjoy yourself. It's good to have those weekends where you can let loose, you know? And be yourself. That's the thing about clubs in general, the best type of clubs are the ones where you can go and be yourself, and no one's judging, no one's looking and everyone's dancing, and the crazier you are, the cooler you are (laughter).

The Dinah promoter told us that you have an incredible stage presence and that your performance at The Dinah is going to be amazing.

Ahh, she's sweet, isn't she? I guess I have fun up there. I think when an artist is up on stage and is having fun, it kind of rubs off on the crowd as well. And I'm really looking forward to it cause a great friend of mind performed at The Dinah Shore on the weekend last year. Her name is Luciana, and she said it was sooo much fun. She loved it. She had such an incredible time. And so as soon as I got the call about this event, I was like, yup, I'm in (laughter), straight away. I'm looking forward to it. It's going to be fun. I'm assuming it's going to be incredibly wild, and that's the way I like it. And I love seeing girls in the crowd. Girls in the crowd is so much more fun (laughter).

April 1 is the last day to buy your tickets online for the discounted price. We hope to see you at The White Party, the biggest Friday night party for women in the world. Watch Brown's music video to "We Run The Night" below and enjoy a preview of what you'll see when you join us at The Dinah.