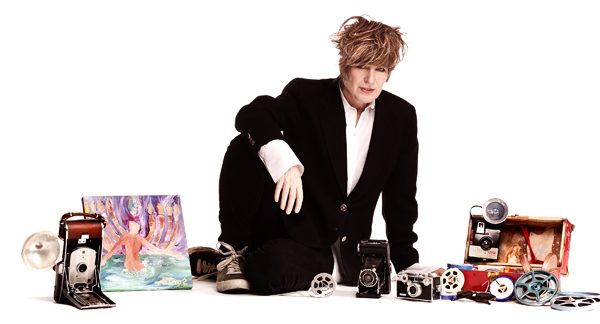 In the wake of her new album, Broken Film, SONiA goes in-depth on the 2008 financial crisis and then gets personal on why she makes music.\r

disappear fear was formed by SONiA Rutstein and her sister Cindy Frank in 1987. The goal: to never be afraid to be honest, and to write songs that reach the LGBT community in a time where there wasn’t a ton of music for the queer crowd. Since then, SONiA has taken the band around the world, and while the group lineup has changed, the objective certainly has not, and she’s still championing LGBT issues and rocking hard, all in a day’s work.

SONiA from disappear fear gave us the scoop right after the first leg of the 53 city tour from her home in Baltimore.

Broken Film is an album filled with stories. What is the story behind first song, "Start"?
That’s a song I wrote with friend a from Denmark, Klaus, and the essence of the song was that we were both really moved by this veteran that we were listening to speak—he had been wounded in Afghanistan, and he lost both legs and one arm, and yet what he was saying was that you don’t need hands to hold somebody’s heart, that you can still live a very rich life. So basically, [it’s about] the opportunity to move forward and embrace our lives regardless of the tragedies that happen around us and to us, and it’s just about starting.

It’s definitely a motivational song, which kind of begs the question ‘Start what?’
Just start loving out loud. Start living your life like it was the greatest gift, because it is.

How about the story behind "The Banker"?
There was an article that I had read by Matt Taibbi talking about the entire banking crisis (it’s the March 14th issue of Rolling Stone), so after reading even halfway through that article I started working on the song, and of course I read the rest of it and finished the song. I just think it’s the decisions of particular people on the boards of these investment banking companies that have really screwed things up for the entire world in a really gross, greedy, selfish, disgusting way. And I don’t feel that they should get away with it.

I was so infuriated after I read it, and I just [came up with] that whole rhythmic ‘Not a bank’ part. The real crux of the song is that beginning and ending part that says it’s not a bank, it’s a banker; not a paper, not a symbol, not a building, not the bubble that some bad seed human being that made this policy that we’re all just really trying to recover from.

Why did you chose to release Broken Film on the second anniversary of Occupy?
It just really brings the point home that most people haven’t forgotten what occurred, and that’s really what the essence of Occupy Wall Street was about too, is just about like let’s not forget about this. You have forgotten about the middle man and let’s address this. We’re still there and we’re still angry.

One of the songs that has gotten a lot of attention already is called "Love Out Loud." Any thoughts on the buzz?
I really came up with the Love Out Loud idea about 25 years ago. We created T-shirts for that back in the early '90s, and people would say is there a song called "Love Out Loud" and [we’d] always have to say no, it’s a line in a song but it’s not an actual song. So I just actually sat down and wrote it just all at once, which really is just like a coming of age song and again in some ways it reiterates the themes of how precious today is, how precious this moment is, how precious and priceless are the people that we love and that we wanna be with. That song was also used for marriage equality in the March for Marriage Equality in Springfield Illinois on October 22.

Your support from the LGBT community has always been really strong. How does that connection impact the songwriting process?
It’s a really organic process for me, because when I first started doing my music when I created disappear fear back in October of 87, the idea was that I was just gonna be honest in my songs. I liked pop music, but I definitely never heard like a lesbian love song or anything like that really that was obviously ‘I love her’ and a girl singing it. I just decided fuck it, I’m just gonna do it, I have to, hence the name disappear fear. What was popular back then was Grease, which was great, but it was like where’s the gay people? Certainly in this clique of like five men there must be a gay person.

I just thought I want everything, I want a full equality. It’s a whole big world, why can’t we share it too, why can’t we kiss in public? So that’s always been a huge driving force for me. I decided when I started disappear fear with my sister that I would never do that anymore, that my songs would empower little Sonias out there.

Is it too early to ask what’s next?
No, not at all—what’s next is two more legs of the tour. The album is charting now on AAA radio and also on Americana. And of course all the buzz that we’re getting about "Love Out Loud" is really cool too. We have the matching T-shirts which is very nice. We never had like a T-shirt song, you know?

SONiA Rutstein has a  “Broken Film Tour” show at Joe’s Pub in New York this Halloween Thursday, October 31 at 9:30 p.m. If you're in the area, check out disapear fear and don't forget to wear a costume! Tickets are $18.