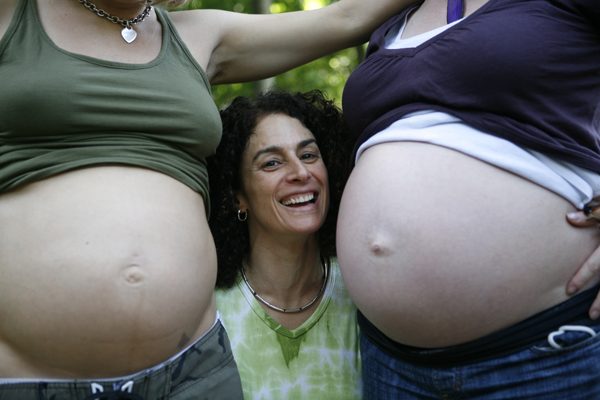 The stunt woman turned director of “The Baby Formula” talks the challenges of working with a pregnant cast members, her daring day job and how a near death experience inspired her to come out.

Alison Reid’s resume reads like the manifesto for a bona fide badass, from stunt doubling in Shoot ‘Em Up and X-Men: The Last Stand to coordinating the stunts in two of the Saw films, it’s clear that Reid is a woman not to be trifled with. However, this self-professed adrenaline junkie has found a new passion behind the camera in directing the sci-fi mockumentary The Baby Formula about a lesbian couple who are each able to conceive the others’ child through stem-cell sperm technology. The film thrilled festival audiences last year and is now available on DVD. Reid shares the challenges of working with a real-life pregnant cast, her daring day job and how a near death experience inspired her to come out.

How did you become a stunt coordinator?

My standard answer is I fell into it…I did my first stunt when I was 17 years old and I just craved excitement and I was sort of bored with school and…I was a bit of an adrenaline junkie so…I went after it, and managed to make a career out of it.

How do you mentally prepare yourself to do something that, you know, involves like a lot of people’s phobias like heights?

I think everyone’s different. Certain people  are more comfortable innately with different activities. Like for me, acting scares me to death. You have to be so vulnerable to be an actor and show your emotions, whereas heights and physical activity and being bashed around. My personality just makes me more innately comfortable with that and in fact, more than that, I like it. I feed off it and it excites me and it fulfills me, so it’s a pretty good match.

Would you consider yourself to be a really daring person or are you more like the chef who doesn’t like to cook at home?

No, there’s definitely overlap for sure. But like I said, it’s a gradient. So, when you’re doing stunts on a film set, it’s a very controlled environment and you know exactly what everyone else is supposed to be doing. Out on the highway when you’re driving, no one’s expecting you to be doing anything crazy so you have to keep tabs on it, in your everyday life a little bit.

Do you have a trademark stunt or something that you’re kind of known for in the industry?

Well, I’m mainly stunt coordinating now and I still do stunts for sure, but I love doing high falls. I love heights.

You decided to come out after you broke your neck in a stunt gone wrong, can you tell us about that?

I was rolling a car off a ramp and…there was an explosion to go along with it and it went just perfectly. The car flew up in the air and came down on its roof…it wasn’t until I took my helmet off and my neck brace that I realized something wasn’t quite right. They took me to the hospital and of course discovered that C1, which is the very top vertebrae, had a compression fracture…that could’ve been my last moving moment or my last moment alive. The attraction to women had always being in my being, I had sort of suppressed it and that just came to the forefront as something I didn’t want to suppress anymore.

Was there ever a time through that process when you were having second thoughts about maybe going back to going into doing stunts and coordinating stunts?

When you make your living doing stunts, you know, the aim is to keep everything safe and when you’re doing things all the time, it just makes you keep vigilant and think of every little thing that could possibly go wrong and guard against it as best you can.

Not that I take anything for granted. The reason my accident happened was because there was a roll cage that was made incorrectly, so that roll cage caved in instead of protecting me and the car sort of came down on my head. It makes you really vigilant because the stakes are so high. It makes you vigilant about checking to make sure everything’s as it should be.

How did you go from stunts to directing The Baby Formula?

I’d wanted to do it for a very long time and like I said, I just felt like I needed to be challenging myself in different ways…and was interested in telling stories that appealed to me.

Part of the creation of The Baby Formula was writing it on the fly. How was that experience?

When we started shooting we literally had, I think, 30 pages of script and very little of that actually made it in. So, what happened was I found out they were both pregnant, we got together and Angela [Vint] and Megan [Fahlenbock] said they were both on board to make this film with me, so then I got on the phone to Richard Beattie who co-wrote the short film [Succubus] and I just said, This is generally the way I want it to go—write! So, he just started going and when we started shooting we didn’t have any idea where it was going go.

What unique problems did working with a pregnant cast present for you?

Oh my God. [Laughs] What like when they go into labor when they’re not supposed to in the middle of a shooting day, that kind of thing perhaps? I wanted to shoot during the Pride parade here in Toronto and have Angela’s water break during the parade and so we could make a bit of a scene of it and throw her on the back of a Harley-Davidson…and we were rehearsing that exact scene when her water broke. For real.

Were you able to use any of that footage?

No we had to actually, I mean, believe me, after the initial shock was over I sort of said, “Hey, Angela, I’m gonna turn the camera on,” and she said, “Mm, I don’t know if I’m so cool with that.” But I had an EP take camera, so we have in the DVD extras.

We had to rewrite the scene, so we shot down in Pride with Megan Fahlenbock, the other actress, who was hilarious. She said, “I got to go through Pride and I’m not really myself, I’m in character,” so I was doing all these things, like a lot of this was all ad-libbed so she’s interacting with everyone. And you know, there’s the naked guys and they’re like “Free yourself! Take off your clothes!” So she whipped off her top and we were right there shooting it, so it was great.

The other thing about having them really pregnant is that I was able to talk to them about what they were really going through and incorporate that into the script. Both their real babies are in the movie as well. So, it may be a corny thing to say, but the crew and the cast, we started to feel like a little family, because in the beginning we had pregnant women around and then we had actual you know, little babies on set.

The Baby Formula has kind of turned out to be a little bit prophetic, you know, with the sort of  advances in the science around it.
What are your thoughts about that in general and do you think that this is sort of an exciting step forward, something that you’re hoping to see kind of continue to advance?

Absolutely. I made this short film Succubus about these two women who were trying to conceive together. One of them worked in a lab and by fluke the actresses got pregnant in real life. When I found that out,  I said, “Oh we have to make a sequel,” and I’ll followed them through their pregnancies as if they’re the first two women, you know, giving birth to each other’s babies kind of thing. And it was interesting to see how the science changed even in that short year period between when I made the short film and when The Baby Formula came out.

What do you have planned next?

Well, my plans are two-fold. I want to make another feature film. And I want there to be some stunts in this one. But I also very much want to make a television series using The Baby Formula characters.

We’re in some discussions with the CBC and with some producers in Canada that have track records with series, so we think that there’s a lot of potential there. It was actually a journalist on the film festival circuit who said this would make a great series. To sort of pick it up when the babies are toddlers, the first stem cell babies in the world. You know, there’s a pretty fun family dynamic. Angela’s or Athena’s mother is a religious, right-wing, trying not to be homophobic woman and Megan, or Lillith’s parents are a couple of gay guys, so there’s a bunch of family stuff to have some fun with.

I hope you’re right, we’ll see. There is the flip side of the coin, you know, because there are so many fewer women directors, maybe there’s more chance for us, I don’t know.  We’ll see when I try to get more films off the ground, but I haven’t run across anything directly.

OK here’s a fun question, aside from your partner, who would you chose as your stem-cell baby mama?

It’s hard not to say Angelina Jolie. I was one of her stunt doubles in Taking Lives.

Who would win in an arm-wrestling match—you or Zoë Bell?