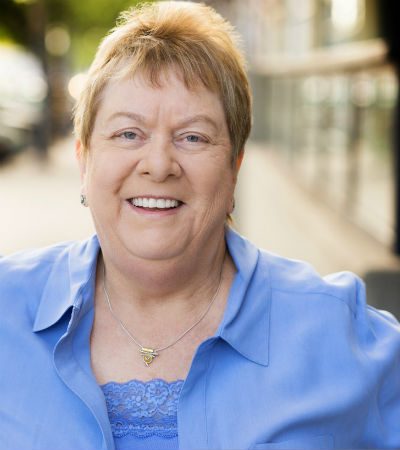 Jan Miller Corran is a psychologist who loves film!

In 1994 Jan was Executive Director of a dementia care center in the San Francisco Bay area. Well-known documentarian Deborah Hoffman and her wife Frances Reid were completing the film Complaints of a Dutiful Daughter.

A film about the struggles of now deceased Doris Hoffman who lived in her facility, it was nominated for an Academy Award for Best Documentary Feature.

Consulting for this film was the catalyst to her passion for creating films. Jan put it on the back burner for ten years until in 2005 she was asked to be part of another award winning documentary, and this is when she was hooked. To date, Jan has been involved in 16 projects and with only two exceptions; that are the stories of the lesbian community.

A decade passed between that documentary in 2005 and her feature film involvement. Jan was looking at a Kickstarter in 2012 and the featured campaign was for A Perfect Ending by Nicole Conn.

She took a chance and sent in a donation for $500 which turned out to be her best move. From that day forward she became involved as an Executive Producer in a number of projects from documentaries to shorts to feature films. In just three lightning speed years Jan has invested in films like Anatomy of a Love Seen, Jenni Olson’s Royal Road, Deb Shoval’s AWOL, Daniele Earle’s Lover’s Game and the soon to be released Raven’s Touch by Marina Rice Bader and Dreya Weber.

So how did Jan’s passion for film lead to creating a film funding business? First, after being totally devoted to raising money for films, she recognized that it is one of the most challenging tasks she has ever faced.  Everyone is hungry for great lesbian films yet getting the dollars to make them is daunting.

The future of great films depends on the generosity of all of us who got our first taste of lesbian feature films with Desert Hearts and Claire of the Moon.

What has been your most successful experience in filmmaking?

There are many ways to measure success. To me success is a combination of social/emotional impact plus critical acclaim.

Each film I’ve been involved in so far has had success and that in itself is an outcome you hope for but don’t always get.  I have a number of out of the box successful experiences but three stand out… so far. The first came in 1995 when Deborah Hoffman and her partner Frances Reid wrote, directed and filmed Complaints of a Dutiful Daughter. I was Executive Director of the dementia facility in which Debbie’s mother Doris lived. The film focused on the stages of Doris’ progressive dementia, but what I took away was the love and acceptance Doris gained for Frances and her role as Debbie’s partner. The film became an international anthem for understanding dementia and a beautiful lesbian relationship. To me an “a-ha” moment. Plus, the film was nominated for an Academy Award. It was a thrill to see my name in the credits and awakened my love of film.

The second came last summer when I was Executive Producer for Anatomy of a Love Seen written and directed by Marina Rice Bader of Soul Kiss Films. It was filmed in five days and improvisational. I don’t know if I’ll ever have that kind of experience ever again. There was an energy on that set that was palpable. From the incredible actresses to the cast to the director there was a unified passion to accomplish what seemed almost insurmountable. Creativity was electric. And it all worked. The film has gone on to premiere last summer at Outfest and has received rave reviews.

The third big success is being one of the Executive Producers of I’ll See You in My Dreams starring Blythe Danner, Rhea Perlman, Mary Kay Place, and Sam Elliott. It was a fan favorite at Sundance this year and there is Oscar buzz for Blythe Danner.

I guess you can tell that I have been enormously lucky to be part of films that have very successful outcomes. The ones I’m committed to through 2017 have all the makings of memorable and successful movies.

Being a producer demands a good observation and patience the two requirements also needed for a psychologist as you started off. Tell me about this.

My background in psychology and years of work with brain injury, gender identity issues, severe mental illness and dementia have been an asset. I am often asked to help writers and directors with the reality of living with schizophrenia or major depression as they develop characters in their films. They want to get it right and I hope my insight is helpful in this process.  I am an observer of people and all of those nuances that make each of us special. Patience is not my best trait as evidenced by a “Patience Grasshopper” t-shirt you will find me wearing on set to remind me to be much more patient with the process.

Would you agree that the LGBT film industry today should have more individuality and fewer stereotypes?

There was a time in lesbian filmmaking when the story line often read:Married woman meets beguiling lesbian and has a passionate love affair then “has a V-8” and goes back to hubby.  Frankly, I don’t think I can watch this storyline anymore. I want entertaining thought provoking stories or uproarious comedies with lesbian characters that are real. We don’t all have flannel shirts, keep a U-Haul reserved, only have lesbian friends and experience the factitious lesbian bed death syndrome.  I do feel that change is happening. The films I am currently involved in are films with well-presented women who happen to be lesbians and not just lesbian films.

What genre of films are you looking for to personally fund and make or to help find funds through More Than Friends Film Funding?

I will always gravitate to LGBTQ films, but most important to a unique story. I’m a romantic so I love the love stories and I want the happy ending. I’ve been involved in documentaries, short films and feature films. I choose what I want to support based on subject and frankly, the passion of the writer, the producer and director. If those players feel passion, it translates to the film. I am sent at least five scripts a month for consideration to either fund or assist in getting donors/investors. Though I know film taste is very individual and “good” film is in the eyes of the beholder, I do have a sixth sense about what will be a successful film. I enjoy reading the scripts and I can either visualize it on the big screen or not. Currently, I believe 2016 will be the year of the transgender film and the happy ending film. I’m waiting for the next big lesbian musical but so far no one has approached me with it.

What is your lesbian favorite movie?

How about a remake of the good old movie ‘love story’?

I love this question because I really do wish someone would take the original scripts for great love story films and make the principles two lesbians. Picture Notting Hill with two females. I think we are ready for Julia Roberts to say, “I’m just a girl looking at a girl asking her to love me.”

In a nonprofit organization, how challenging is decision making with your board of directors? What scripts do you turn down?

The Board of Directors of More Than Friends Film Funding believes in the mission, which is to assist primarily women filmmakers in raising funds to make their LGBTQ themed films. We don’t assist filmmakers who want to make pornographic films, abusive and degrading films, or, in the case of documentaries, any film that isn’t truthful and have educational value.

Where do you see More Than Friends Film Funding in the future?

MTFFF is new. It comes just as the genre of LGBTQ films is evolving. The need to crowd fund and seek donors and investors for independent films is going to be ongoing. In the future I hope MTFFF can be the catalyst to educating the public in its role in bringing films to the big screen. In turn, I hope that, as a result, new women directors, writers and producers will be able to bring their visions to the festivals, the DVD players, the streaming platforms and the mainstream theatres. There is so much talent just waiting to burst on the scene. MTFFF can be a bit of the push to make that happen.

Why should lesbians turn to More Than Friends Film Funding?

More Than Friends Film Funding seeks public funding for the films we believe will be the best of the best. The LGBTQ community pleads for great films that tell its story in beautiful, sexy, funny, wondrous ways. It only happens if that community financially comes through for the independent filmmakers who do have those stories to tell. The big studios are not embracing LGBTQ films. It does take our village to make that happen.

What upcoming projects should we expect from Jan Miller Corran?

I’m very excited about two upcoming projects that I am personally involved with as well as highly recommending that the public help fund. The first one is Ava’s Impossible Things by Marina Rice Bader, which will film this summer. It fits all of the best criteria I’ve stated. Unique, thought provoking and filled with new and fresh characters of which a few happen to be lesbians in love.  It is described, as “magical” and I believe it will definitely be that. The second project is Follow, directed by Melanie Mayron and produced by LeeAnneMatusek and Todd Shotz. One of my favorite singers/actresses Frenchie Davis is in the film. It too has all the makings of an award winning film about love, acceptance and family.

I do want to mention Sacred Country a film in pre-production directed by UK director Jan Dunn and starring Brenda Blethyn and Jamie Winstone. It is the true story of Mary who becomes Martin. If I could I’d bank roll the entire film because it is going to be amongst the most important films of 2016. I can’t, but I can, through More Than Friends Film Funding, encourage people to donate towards it or invest in it.

One thing I am proud of is my monthly column of interviews I do of women directors/writers/producers for www.Epochalips.com. I also do lesbian film reviews for them.

Which quote does Jan, like to conclude with to inspire and motivate our readers and film lovers?

Follow your bliss and the universe will open doors for you where there were only walls.