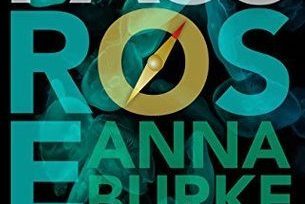 Set in 2513 this dystopian fantasy by Anna Burke, in the lesbian pirate sub-genre, was hard to put down.

The first novel by Anna Burke, and what a great start. Set in 2513 this dystopian fantasy, in the lesbian pirate sub-genre, was hard to put down. Imagine a world where the ice has melted, all that’s left are Archipelagos of land, food is scarce, medicines more so, fuel is made from sludge, the seas are polluted and in some places, the air is worse.

Introduce the young fleet navigator, Compass Ross, born facing north and always aware of her direction, she has an uncanny, almost psychic ability to tell where she is, predict currents and speed, and has quickly become a most prized tool for the Archipelago’s fleet Admiral. Sent on an undercover mission to work with the renegade pirate Miranda, Compass Rose’s task is to help the pirate Captain find the megalomaniac Ramada, who is determined to take over the Archipelago’s resources for her own gain.

Combine fast-paced action with swashbuckling adventure, a “will they- won’t they” romance, great dystopian world building and a wide-eyed and innocent main character coming to terms with a cut-throat world and Anna Burke has created a real page-turner.

Compass Rose is adorable, naive, trusting and completely unaware of her value. She is used, threatened, supported and occasionally befriended by a wide range of characters which make this a huge ensemble piece. From the wily Admiral and her honest daughter to the bullies, murderers and haters of both the fleet and pirate ships, Compass must learn fast. Add in the seemingly hard-nosed but entrancing Captain Miranda, and the even nastier baddie, Ramada, and we have every shade of character on the spectrum.

I found the writing intriguing, the tone and energy were different to the standard lesfic novel, and I don’t remember reading anything quite like this in the sci-fi fantasy genre; definitely a new voice and a unique style. The world building was excellent with huge attention to detail, the characters are well drawn and varied, the descriptions vivid and colourful and the action was extremely fast-paced and multi-faceted, it felt like reading an action sci-fi movie… and what a wonderful movie it would make.

Can’t wait for the next one from this exciting new author, a sequel would be wonderful, but whatever Ms Burke puts out I will be reading it. She won the Sandra Moran scholarship, and Sandra would have been proud to have her name associated with this stimulating new talent.