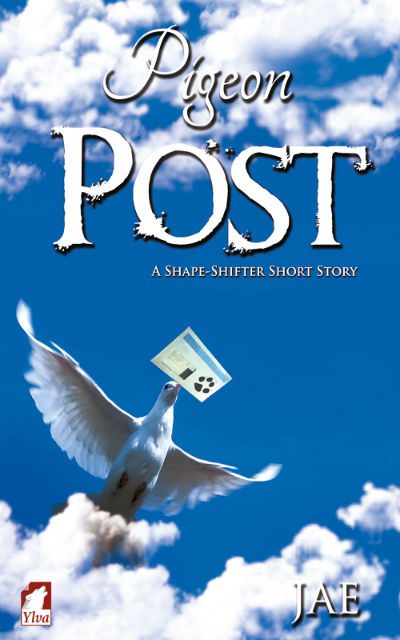 Another delightful short in the Shape-Shifter series.

Another delightful short in the Shape-Shifter series brings the cast together in a PR stunt not exactly in tune with their natural instincts.

Pigeon Post is a short story in Jae’s Paranormal series following the lives of the shape-shifters and their attempts to live normally in a hostile world. In Second Nature we met Jorie, an author of Paranormal Shape-Shifter Romance novels, who has no idea how close to the truth she is. Griffin is a Saru, a soldier whose mission it to protect the shape-shifters secrets, at any cost.

This was followed by True Nature which introduced Kelsey and Rue and ‘outs’ shape-shifters to the world. In addition, Jae already has several shorts in the series, including Natural Family Disasters – which pulls in five tales about Griffin and Joire and Nature of the Pack, which extends Kelsey’s story.

In Pigeon Posts we find the cast of shifters called to a rally on the anniversary of their accidental ‘outing’. In the year since the human world became aware of them the government has taken away their rights and as usual the ‘haters’ have polarised public opinion. It’s a simple tale which reflects the battles of minority communities to be noticed, to show they are ‘normal’ citizens rather than some demonic force out to eat American babies.

As always Jae’s writing is exqisite. Crafted, humorous, clever, she continues to entertain. For those who don’t know, she writes at an incredible rate, words seem to be gushing out of her fertile imagination. Amazingly the quality doesn’t diminish, rather the touch of her pen becomes lighter, more confident and more precise.

For me personally this was a test. I have never really been into Paranormal as a genre. I love fantasy, and have some sci-fi favourites, but back in the 80’s, Stephen King freaked me out, Anne Rice did nothing for me and I have shied away ever since. The rise of the lesbian fantasy has me intrigued, and so I decided to try out Jae’s series because I trust her writing.

It’s obvious I wasn’t disappointed. Her characters are rich and warm, her story-telling is as good as it gets and her world pulls you in, engaging your brain and heart in the lives of those she writes about. If you like Paranormal you will love this series and if you have never tried a Paranormal Romance then Jae’s wpnderful writing will definitely convert you to the genre.