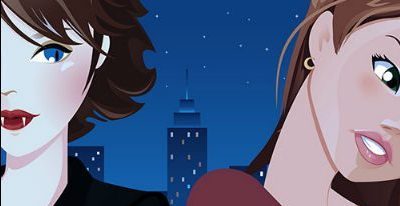 A female vampire with a drinking problem, say no more!

Secrets and sparks abound when Robin and Alana first lay eyes on each other at an Alcoholics Anonymous (AA) meeting.

In Good Enough to Eat Alana is a lawyer who had a significant drinking problem. Now she is two years sober. At an AA meeting, she meets Robin. Robin is a female vampire who wants to get rid of her own addiction and her own special demons: She isn’t tempted by alcohol, drugs, or fast food—she is determined to fight her craving for human blood, preferably 0-negative. AA is her last hope.

Robin and Alana are fascinated by each other right away. Alana wants to help Robin get rid of her alleged alcohol addiction. But who is the “real” Robin? Alana doesn’t know. And even Alana has more secrets than you might think. Many surprising twists in the book made me laugh out loud: What happens, for example, to a vampire who drinks synthetic blood and writes vampire love stories?

During the course of the book, each character lives through her own journey until they can trust each other completely. For a long time, Alana doesn’t know who Robin really is, so she can’t know the difference between the urge to drink alcohol versus the need for human blood.

Robin’s and Alana’s friends keep meddling in their lives. Robin’s parents in particular can’t accept that their daughter doesn’t want to live like a traditional vampire: A vampire needs human blood, no matter how many humans lose their lives in the process. Will they both fight for their right to love and find happiness together, despite these obstacles?

I couldn’t stop reading. I always wondered: What’s going to happen next?

Alison Grey and Jae have created a wonderful novel. I had the opportunity to interview both about their jointly authored book. Alison Grey tells the story from the point of view of Alana and Jae from the perspective of Robin. As Alison wrote in her e-mail: “It was very exciting to send a scene to Jae and see what she made of it and where she took the story next.”

I can only say that the joint planning of the novel was very successful! The transition between the two different perspectives is so fluid that I only noticed two authors writing one novel when I looked at the details.

The book is perfect reading material for a relaxing afternoon or evening. I’m looking forward to reading more books in this series. The title (Good Enough to Eat—The Vampire Diet Series Book 1) promises a sequel. I hope it won’t take too long until we get new stories about Robin and Alana!