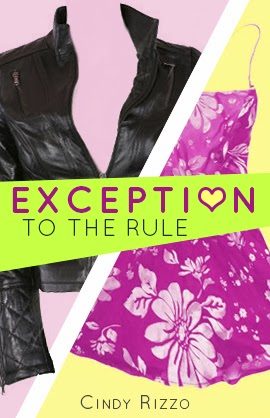 A multi-layered coming-of-age story with its own rules.

How can a story about first love not be “just” a romance? Well, if it doesn’t fit the mould but rather exceeds the parameter of a typical romance, if it is not the same-old-same-old about two young women falling love, then it is so much more then “just” a romance.
Exception To The Rule is in itself a rather rare exception from the usual “first love” and coming-of-age story and at times gripping, but always positive and a thoroughly enjoyable read.
Oh what a great mix of characters! Exception To The Rule focuses on three unlikely muscateers –Robin, the aspiring writer from a very liberal, Jewish East Coast family; Tracy, the closeted femme and highly intelligent Southern Belle; and Angie, the scion of an East Coast political dynasty. Cindy Rizzo takes us back into the 90s and right into the crucial, formative years of those young protagonists who meet at college in Boston.
One memorable trait is how Cindy Rizzo lets us experience the society back then: Each visit of Tracy back home to Durham, North Carolina, takes us into a time where being gay was not discussed in “polite” company, where it was more important to conform to the unwritten rules than anything else and where the color of your skin and your “pedigree” was of paramount importance.
And although set in the 90s the penetrating glimpse into the fabric of Southern families and mores is by no means outdated. Robin adds other layers: Her involvement with homeless LGBTQ kids is a counterpoint to all this privilege and a poignant reminder that being out would carry a high price outside certain priviliged circles. Again a topic which is far from outdated.
The excerpts from Robin’s short stories about those kids enriched the story as do those gritty, strong characters as TJ or Tracy’s and Robin’s research project with those “outcasts”.
And I loved to see that via Robin and her family the WASP-mould was broken up and her Jewish background was woven into the book.
There is more to discover – but you have to read the book to find out, e.g. about the world-wide lifesaver Charlie or the unltra cool Professor Coolidge.
Multilayered is the word which came to mind to describe this book, a book which is nicely wrapped up with an epilogue “eleven years later”. Kudos to Cindy Rizzo for a very well-written, well-edited and well-rounded debut novel.