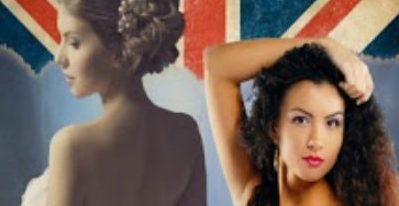 The Time Slip Girl is a story of Dara, a young woman who is touring London with her brother and picking her life back up after losing her soon to be wife.

When she opens a door in an Edwardian house she falls through time back to 1908.

Agnes is a quiet woman who sticks to herself, living in fear after the turn of the century. Her abusive brother drops in and out of her life as he sees fit. She really has no choice in the matter if she doesn’t want her closely guarded secret brought to light. On one remarkable night her life is changed forever when she finds an oddly dressed, very confused, and confusing female in the basement of the home she rents an apartment from.

This book was a good pace, well flowing, captivating read that I just could not put down. I read through the night till I finished a bit after the sun rose! It was a great story even before it got to the romance and then it got better! I loved the realness of the characters, their insecurities and doubts only made them more sweet and believable. I liked how Ms. Andre took me back in time and showed me what it really would have been like, the sights and sounds and even the smells…. The hardships people experienced and the things women had to endure, the things that were commonplace then, and are taken for granted today. I am so grateful to be alive now and not then!

I enjoyed Agnes’ curiosities and her delight in simple things. How, even though she sometimes seems so meek, she has such a strong sense of loyalty and is willing to overcome fear to do what is right and to follow her heart. I fell a bit in love with Dara. Besides being lovely, she did face her situation head on (after freaking out a bit at first, but going back in time more than 100 years would tend to do that to a person). She did her best to adapt to and accept the changes she found herself in. She was able to stand up to Ted and keep him from hurting her and Agnes too. She did what needed to be done and allowed herself to love Agnes—which made me smile and my heart grow so big!