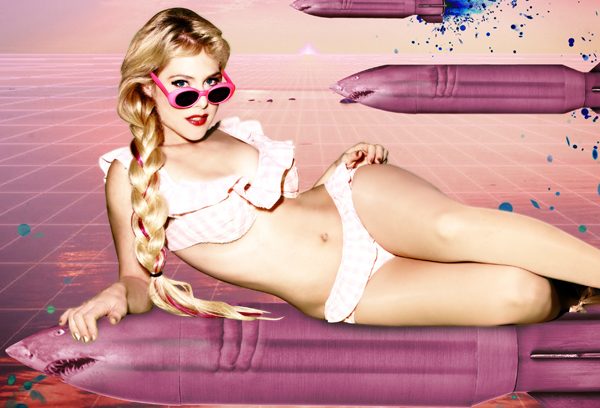 Hailing from Israel where she was nominated for two Israeli Oscars, author, actor, singer and songwriter Meital Dohan (pronounced “Mey-tål”) has exploded into American consciousness with her guest spot on Showtime’s hit show, Weeds, and her hit track “Yummy Boyz.” This gorgeous powerhouse is set to perform at Club Skirts Dinah Shore where she will delight the yummy girls on their lesbian spring break.

You’re clearly a brilliant triple threat. Which aspect of your talent are you most passionate about?

Well thank you! I’m most passionate about the depth of the work, rather than the type of work, whether that be on stage performing, in a film or writing a book. Right now the music is really exciting to me because it’s something I’m building and involved in on a 360 spectrum. With my music and the videos around it, I’m involved creatively 110 percent and that’s really important to me.

What most excites you about performing at Club Skirts The Dinah?

The Dinah Shore Festival is supposed to be a total blast. It’s the largest lesbian music festival and in recent years had great artists perform there. It’s pretty cool to have been invited to take part in something that celebrates lesbians and an equal-rights/equal-access society through music and fun. When you can marry dancing and music with a political statement, you’ve really accomplished something beyond the ordinary.

Have you had much exposure to lesbian audiences before?

I’ve had more exposure to a gay audience because I had my first show at a Grindr party hosted by Jeffrey Sanker at Club Eleven for my song “Yummy Boyz.” I don’t think you can like an audience more for their sexual preferences, but I will say that my experience is that the lesbian and gay community is more open to provocative, boundary-breaking music. Stuff that’s ahead of its curve. How can you not love that?

Can you describe some of the biggest challenges you found on moving to the U.S. or was it a smooth entry?

I don’t think anything in show business is smooth; it’s a lot of bumps and turns and back-flips along the way but that’s just the chaotic beauty of it all. In Israel I couldn’t eat lunch without the paparazzi snapping my picture, so it was strange when I first came here and didn’t have that same sort of attention and eyes on me. But like every story that has had its strange twists and turns, I soon found my own path here at first in New York, and now in L.A., too.

Can you tell me about the main contrasts between the Israeli and American entertainment industries?

Israel has an exciting but much smaller entertainment industry than Hollywood. I think Israel has been able to gain a lot of momentum in the past few years, especially in independent films, but we just don’t have the same resources and funding in Israel that people have access to here in America. But less money is not less heart, and I think that also shows.

What is your ultimate goal in the entertainment industry?

Are there other styles of music that you would like to explore?

Definitely. I listen to a lot of Portishead, Radiohead, Mazzy Star, and Air. I like that emotional, rich, moody sound and I think it would be cool to do something more avant garde down the line in that vein.

Tell me about your book writing.

I wrote a book of poetry in collaboration with an Israeli photographer called LOVE AND OTHER BAD HABITS that was published in Israel. It was very personal to me and personified an honest representation of women without the mask of who they were trying to be, or should be.

That openness is really important to me. Humiliation and vulnerability make great art. I am always writing but I’m not sure what my next book will be about. You’ll have to wait and see…

If you would write an autobiography, where would you start?

I would probably start inside the womb. I think I was kicking and screaming to get out of there from the get-go.

What do you miss about Israel the most?

I miss my family. And in a funny way I feel like they are all my family—Israelis in general.

They are all there. Home is people. It’s always people you miss the most. Not only do I miss the holistic feeling of Israel, but also the overtly blunt expressionism of the Israeli people is definitely missed as well.

Do you see yourself as a voice for women? If so what would your message be?

It’s really important to me that all my music and my work speaks to women and has a deeply rooted connection to sexuality and gender issues in 2012. Even a song like “Yummy Boyz,” which on the surface is a really fun dance song, is actually a song that is playing with the idea of a “role reversal” and what it would be like for women to objectify men in the same way men have objectified women over the years.

In this generation I think everyone is objectified, so I sort of play with that idea and add a dash of humor. As someone coming from a Middle Eastern/European culture, I really think it’s time for women to be strong and really love themselves as they are without being victims of plastic surgery, fashion, and eating disorders. They don’t need to try and behave like what they think men would like them to. It’s 2012.