Foley is a seasoned lesbian comedian with her own Comedy Central Presents, appearances on Conan, Craig Ferguson, Arsenio Hall, Chelsea Lately, LOGO and at festivals such as The Dinah Shore Festival, and Just For Laughs.

Huffington Post writes, “She offers smart comedy on politics, culture, sports and commercialism that can appeal to anyone in an urban area or with a college degree, regardless of sexual preference.”

Arch City will also present a live taping of Foley’s podcast “Sports Without Balls.” The podcast is a hilarious extension of Foley’s obsession with sports and is distributed by All Things Comedy podcast network. 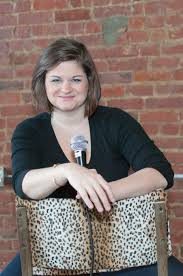 Brooke Cartus – Originally from New York, Brooke Cartus currently lives in Columbus and hobbies include eating chicken wings and anonymously sending skinny women cheese steak sandwiches at 3 in the morning (because that’s when they are the weakest.) Her blog, Size L for Lady, has been featured on Outlook Columbus and Huffington Post: Gay Voices.

Vincent Holiday – Vincent’s unique style of comedy is all about defying expectations. Yes, he’s a nerd. Yes, he’s gay. He’s also a sharp writer who enjoys tipping over sacred cows without talking down the audiences or sacrificing laughs. He’s a talented performer whose hard work earned him a spot at the 2012 Laughing Skull Festival in Atlanta, and his album, Too Soon!, debuted in the top 10 on iTunes. Most importantly, he’s a fiercely funny comedian who embraces his intelligence instead of running from it. Vincent delivers killer sets at comedy clubs and comic book conventions, using his improvisational skills to create memorable characters that are relatable to everyone. Get a couople of drinks in him and he will out-dance everyone in the club.

Jaye McBride – An upstate New York comedian who’s been featured all across the capital district as well as New York, Vegas, and LA. She’s also appeared in the Boston Comedy festival and She Devil comedy festival. Being transgender doesn’t just make her a great target at roasts; it has also given her a uniquely dark and dry sense of humor that will leave you laughing when you know you really shouldn’t.

Alex Seligsohn – A comedian with very strong opinions that she can’t wait to share with you, on topics ranging from haunted house feminism to how Mark Rothko ruined everything. She began her stand-up career shortly after moving to Chicago from Florida, in what she describes as “the greatest decision [she] ever made only second to buying [her] cat a onesie.” In the past couple of years, Alex has been extremely active in the Chicago scene and beyond. She is a writer and producer for the monthly comedy variety show “Secrets, Lies & Alibis” in Chicago’s Lincoln Park neighborhood, performed in the Chicago Nerd Comedy Festival, appears at the Fort Lauderdale Improv, and, at her Second City Conservatory graduation this year, performed a heartfelt song that she wrote about the JFK assassination/the truth.

Cody Melcher – A witwanton and literary gentleman who weaves a tapestry of obscure observations and personal proclivities designed to delight and enlighten. Based in Chicago, he is the producer of 100 Proof Comedy at ComedySportz and host of the critically-acclaimed podcast Tomefoolery. In 2013, he was a finalist in The Advocate’s National Queer Comedy Search. The Chicago Tribune has called him “ridiculously zesty”.

Festival Badges are now on sale through the festival website, www.archcitycomedyfestival.com. These badges allow the purchaser to set their personal festival schedule, and secure upfront seating at shows of their choice. WIP badge holders not only reeive this, but also attendance to two live podcast tapings exclusive to WIP badge holders, entrance to ACCF after parties, and ACCF inaugural year poster autographed by headliners.