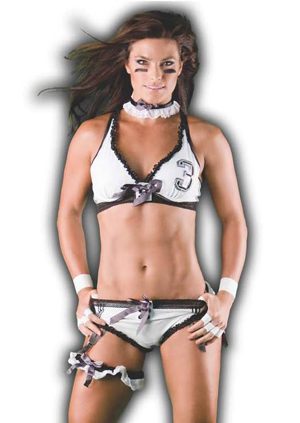 The action at Girl Bar Dinah Shore weekend is set to get steamy at Wet ‘n’ Wild.

The action at Girl Bar Dinah Shore weekend is set to get steamy at Wet ‘n’ Wild.

How did a little girl from a small town in upstate New York grow up to be a lesbian, a leading fitness model and a lingerie football star? Meet Amber Elizabeth—she’s all that, and more. “When I was a kid I was a big tomboy and I’d beg my mom to let me play football. She said no and I was so heartbroken,” she recalls.

Fast forward to a move to L.A. and a friend who mentioned the women’s football league to her. “I went to tryouts just thinking, What do I have to lose. I’ve wanted to play football my entire life, I’m 27 years old.

My mom said no when I was in sixth grade…I felt like it was one of those little childhood things—like all little girls want to be ballerinas, and I just wanted to be a football player. And I finally got to do that.”

She doesn’t look like a tomboy now but she claims to be one, in spite of being on the books for the Wilhelmina modeling agency. “After a shoot my reaction is always, ‘I don’t know who that girl is’…I click in and out of that alternate persona, and then when I’m on the football field I’m able to be myself.”

Make no mistake: Being a model takes a backseat to running around in her undies and knocking other girls over. Any bad injuries? Worst injury so far is “some pretty serious turf burn on my butt cheeks.” Thankfully, her face has remained unmooshed.

So what, exactly, is lingerie football? For Amber Elizabeth, the game, which is televised by MTV2 on Friday nights, is more than just playing the all-American game in your undies. “Is our market for the straight man?

They want to watch a bunch of girls in underwear run around and tackle each other. If that’s what gets them in the door, absolutely, but the way we hit each other, we’ll keep ’em there. It’s real football, with an entertainment aspect to it.

If I make a tackle, I don’t get up and walk away. I get up in that girl’s face and I let her know that I just cleaned her ass out.”

Speaking of out, she is. “The team understands and gets it. We’ll be in a huddle and they’ll mess with me a little bit. They’ll pop out their booty and say, ‘Hey girl, I see you.’ They think it’s funny.”

If you’re headed to Girl Bar Dinah Shore Weekend you can meet Amber Elizabeth up close and personal. She’ll be at the Wet ‘n’ Wild Pool Party on Saturday.

“I’ll put a girl up on the edge of that pool and I’ll be like, ‘I’m going to tackle you right now into that water.’ And if the girl’s ready for it, I’ll do it. I’ll tackle a girl straight into the water.”

Girl Bar Dinah Shore Weekend is on March 30 to April 4.