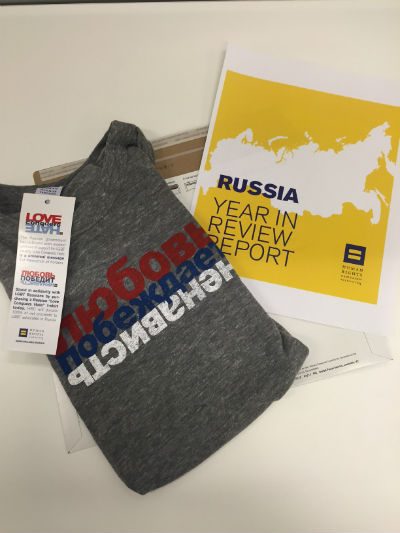 The Russian president gets a gift that’s also a message.

As we gear up towards gift-giving season, presents are beginning to be on everyone’s minds. And no matter what the gift, it’s the thought that counts. Well, the Human Rights Campaign (HRC), America’s largest civil rights organization working to achieve LGBT equality have done some thinking about President Vladimir Putin and some comments he recently made.

Recently, in the World Views section of the Washington Post, Putin said that he believed that love is the meaning of life and human existence. Which is funny, given his stance against homosexuals and their desire to be free to love whom they choose. Consequently, HRC has sent Russian President Putin a T-shirt that reads “Love Conquers Hate” in Russian.

“Putin made clear that love is at the core of every single person,” said Rebecca Parks, Associate Director of HRC Global. “The message of this gift is that all love is equal.”

Putin’s statement seems out of character, coming after a year following the anti-LGBT “propaganda” law, which has inspired violence and hatred towards Russia’s LGBT community. To learn more about what has been happening in Russia, read the HRC report Russia: Year in Review.

Maybe this humble gift of a T-shirt will remind Putin that his words apply to all human beings, not just some.