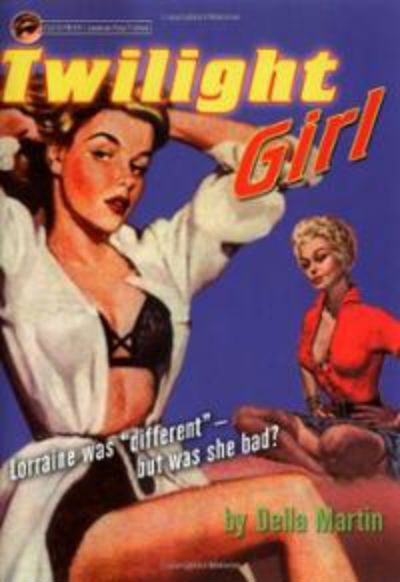 Lon Harris is a dreamer, but has no idea where the dreams will lead her…’

When I began reading Twilight Girl as part of my research for my postgraduate degree, I didn’t expect to feel broken hearted once I read it. But the book left me so moved after reading that I would say it was probably the pulp that had the most impact on me personally.

Obviously, for the purpose of not spoiling the ending, I have to be selective in this review, but in the final chapters of the novel, I began to grasp the limited choices available to women in that era, who were attracted to other women and the dangers of being open about that attraction.

The novel tells the story Lorraine ‘Lon’ Harris, who fantasises about her female teacher and wants nothing more than to run away to a lost island where they can be together as lovers. From the beginning, we see that Lon is a romantic dreamer, and her heart is easily given. Lon meets Violet, who introduces her to the world of lesbian bars and it is there that Lon, and the reader, is introduced to Sassy and her girlfriend Mavis.

Sassy is wealthy and uses this to elevate her status within the lesbian bar scene. However, Lon refuses to be scared of her and falls madly in love with Mavis, much to Sassy’s disgust. Lon’s naiveté leads her into the danger of Sassy’s wrath, at whose hands she receives a nasty beating. Despite this, she still longs for Mavis, and this is where the plots love triangle develops.

Throughout the novel, the author describes the lesbian bar scene and the reader can see how this environment and the influence of alcohol played a huge part in the lesbian communities of that era. These bars were a means of escape from a society that persecuted homosexuals and created a sense of community for the women who inhabited them.

However, this book also shows the use of alcohol to numb the pain of the characters’ existence and the devastating consequences this had. The plot also deals with topics such as drug use and inter-racial relationships.

The author, Della Martin, is sympathetic to her characters’ positions in life, irrespective of their class. This is especially so when looking at the character of Sassy, as although she is a bully, Martin gives us an insight into the reasons why she acts as she does and the pain of her existence.

In a time when it was difficult to write a happy ending for lesbian characters due to publishing decency laws, I believe that Martin was extremely clever by adhering to the moral codes of the mainstream readership (ie. lesbianism is wrong and should be punished) to give a real account of what happened to women who were found out to be lesbians.

The ending of this book was difficult to read and will stay with me for a long time. However, I would also recommend it as one of the best pulps I ever read and would encourage others to read it.