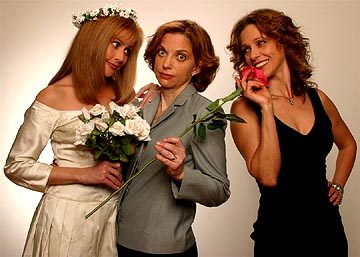 Should I go with the good girl or the bad girl?

I saw A Family Affair at least ten years ago and decided I wanted to watch it again so I could review it.  The film stars Helen Lesnick (Rachel Rosen), who also wrote the script, as a transplanted New Yorker who moves to San Diego, where her parents live, to get away from her ex-girlfriend, Reggie (Michele Green).

Rachel narrates the film starting with her wedding day and working backwards explaining how a commitment phobic lesbian could wind up getting married.  During the course of the film, we meet Rachel’s parents (Leah and Sam) who are more involved in the LGBT rights movement as PFLAG parents than their apathetic daughter.  There is a fun turn of events, with Suzanne Westenhoefer who plays Rachel’s straight sister-in-law, Carol.

If you watched Kissing Jessica Stein after my review last month, you may remember the revolving date scenes.  A Family Affair does the same thing, only with lesbians trying to win Rachel’s favor–hilarious!  Rachel finally agrees to go on a blind date with her mother’s young friend, Christine (Erica Shaffer), and they hit it off immediately.

It’s not long before the U-Haul has pulled up to Christine’s house, and they are cohabitating.  Things are going along swimmingly until Christine starts talking about their future, including marriage and children.  Rachel begins to get cold feet, and, of course, her ex finds her and proposes marriage to her as well.  What will Rachel decide—to marry bad girl, Reggie or good girl, Christine?

The most poignant scene in the movie is Rachel going to her father to ask his advice on what she should do.  Sam has not spoken a word up to this point.  He has just nodded his head or smiled.  When he does speak during this scene, he talks to Rachel about the death of her younger sister in an automobile accident when Rachel was thirteen.  Rachel has never dealt with her sister’s death, and the realizations that come to her during this scene, help her make the decision she needs to make.

You’ll have to watch the film to see what Rachel decides!  The acting is not the greatest, but it’s a great film to watch if you just want to kick back, relax and lose yourself for 100 minutes.