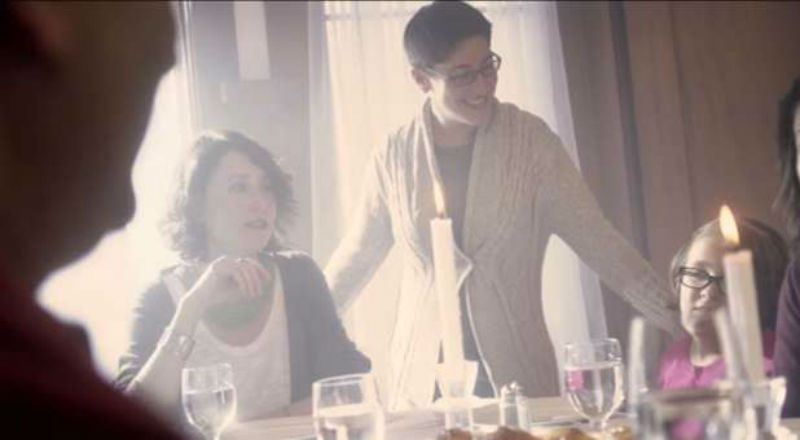 TYLENOL® is launching a new advertisement campaign that is sure to make waves as the country awaits the Supreme Court’s pending decision on marriage equality in Obergefell v. Hodges. The medicine brand, which has been reducing fevers, soothing headaches, and erasing other physical pains for over 130 years, has remained a trusted staple in Americans’ bathroom cabinets—making its decision to showcase real LGBTQ families as an important and potentially life-changing move.

The video project, directed by award-winning filmmaker and social activist Dustin Lance Black, features endearing scenes of various types of families, highlighting how “family” can be defined as when people fall in love, marry, fight, or have kids; because “family isn’t defined by who you love, but how,” the premiere commercial states.Sarah Kate Ellis, president and CEO of Gay & Lesbian Alliance Against Defamation (GLAAD) elaborated on its significance: “Visibility is the root of acceptance…. As more Americans meet LGBT people, they come to see that love is what makes a family. By introducing millions of viewers to loving LGBT families, TYLENOL® is accelerating acceptance and sending a powerful message of inclusion.”

Social media is already abuzz about the campaign, with lesbian and other non-traditional families proudly sharing photos of their loved ones, equipped with the iconic TYLENOL®hashtag #HowWeFamily. The commercials further TYLENOL®’s efforts to unify the “thick and thin” struggles that all parents experience, too, such as with another trending hashtag and commercial, #IWasSoTired, including a lesbian mother who expresses: “[I was so tired that] I put my wife’s [eye] contacts in. I don’t wear contacts.”

Returning to the anticipated SCOTUS decision, the fact that TYLENOL® addresses how we must face these very same issues that any couple does in raising a child should directly challenge the case’s accusations against same-sex marriage, as marriage often comes with children. TYLENOL® stands by the truth that any parent—regardless of sexual orientation—knows of the sleepless nights and routine mix-ups that come with the very real success of loving a child.

As an early twenty-something who looks forward to one day having a family of her own, I am grateful for TYLENOL®’s contribution to thenation’sgrowing acceptance of how I express love.

As if the brand’s open support of LGBT families for over a decade isn’t enough,let’s be honest,TYLENOL® products themselves also help us mentally and physically keep going (and love the ones we love) on a daily basis—thanks, TYLENOL®!

Check out the heartwarming new commercial, and be sure to share your own version of #HowWeFamily.