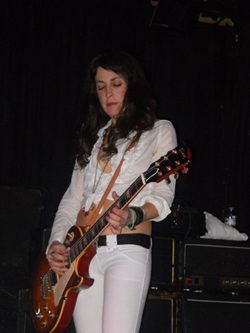 An all-female Led Zeppelin tribute band sounds like a casino kitsch act, but that’s only for people who don’t get it.

Octopus? suggests guitarist Steph Paynes as she peruses a menu from the Greek restaurant Taxim in Wicker Park. We sit down at a tiny table by the window next to an enormous hookah. “I love octopus,” I answer. Rarely do my interviews include tentacles, or ouzo, or a gorgeous woman who impersonates Jimmy Page for a living.

“There’s just something about it,” she explains. “It’s like a call to prayer. I hear the sound of an electric guitar and I’m done. But what really is an amazing byproduct of this, is seeing young kids at an all ages show lining the front of the stage. They’re 14 years old. They have long hair. Might as well be 1973. Might as well be Led Zeppelin. The difference is those young boys and girls too, are going to walk away never ever doubting that women play the most powerful rock music they could ever hear.”

An all-female Led Zeppelin tribute band sounds like a casino kitsch act, but that’s only for people who don’t get it. “We’re very serious about approaching the music,” Paynes assures me after a quick toast. “Jimmy Hendrix used to lick his guitar and then set it on fire. You would never for a minute doubt the seriousness of the musicianship. It’s a blues tradition. You go see Buddy Guy and he’s whipping his guitar with a towel and Chuck Berry duck-walking, everyone has their schtick and it’s part of entertainment and music is entertainment. I think it’s just so boring when people get all heavy about it and stand there, solemnly and they deliver this music. That’s missing the point.”

From the first song, I can see that the rest of the band has done their homework, as well. Singer Shannon Conley moves like Robert Plant. She hunches and struts and screams with unbelievable authenticity that both mimics and redefines the Zep sound. Rounding out the rhythm section is Megan Thomas on bass and Leesa Squyres doing the Bonham thing on drums.

Their playful moniker aside, Lez Zeppelin is no joke. I love the original band and there is something so phenomenal about hearing this music that has always been so moving to me, played by someone to whom I would actually be attracted. No offense to Plant and Page, but Conley and Paynes have a certain visual element that was heretofore lacking.

Through endless tours and television appearances, lineup changes and interviews, this is Steph Paynes’ baby and she runs a tight ship.

“It’s not like we’re trying to change the world,” she says modestly. “But it does. One listener at a time. Some young girl who loves the sound of the guitar can come to a show and she doesn’t have to feel like, ‘I need to be a young, British hot-looking male rock star and I’m not that.’ She can think, ‘I want to be like that girl who played the guitar. Look at her. Let me steal her licks.’ Wouldn’t that be wonderful?”

Yes. Yes it would.