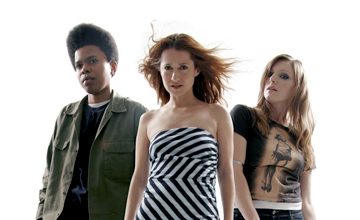 Telenovela Star went from the laundromat to iTunes.

Nikkie McLeod began her relationship the way many of us have—by responding to a Craigslist posting. But instead of an awkward first date, a sloppy roommate or a one-night stand, she got a band. A kickass band. A kickass lady band: Telenovela Star.

McLeod says she knew right away that the group belonged together. “We really communicated well musically. As soon as I sat down and started to play, it just made sense,” says the 31-year-old drummer.

When McLeod saw the Craigslist posting for an all-girl band, she had just moved to New York City, had no Internet access and was therefore unable to learn the songs that the other two women had sent her. “We basically had to jam,” she says. “Good thing we’re all really good at jamming.”

By the end of the session, everyone on stage agreed that the trio was great together. Centered on McLeod’s heavy drumming, the screaming guitar and vocals of Maggie Argyros and the sexy bass and vocals of Hanna Klein, Telenovela Star was born.

While deciding to become a band came easily, finding a name seemed to drag on. “It was becoming a problem that we didn’t have a name,” says McLeod, explaining that the band wanted to perform but still didn’t know what to call itself.

The struggle to find a name that embodied the group continued until one fateful day when Argyros began talking about the telenovelas that were always playing at her local laundromat. “How about Telenovela?” Argyros asked, interrupting herself. But the name was already taken by a Chicago band. “Well then, how about Telenovela Star?”

McLeod says the name “just clicked,” adding that it fit because the group can be “sort of dramatic sometimes.”

The drama is obvious in photos of the band. With their stylish wardrobes and windblown hair, the edgy New York girls photos look like an Urban Outfitters catalogue spread, or perhaps an advertisement for a real telenovela.

When asked who each of the band members would play if they were actual telenovela stars, McLeod gets thoughtful.

“Um…I guess I’d be the gay cousin,” she says, laughing. “And Maggie might be the drama queen. Oh God, she’ll kill me for that. And Hanna, well she’d be the mellow, stable person. Do they even have that on the show?”

We agree they must, but can only come up with Brandon from Beverly Hills 90210 as a possible example.

While none of the band members are Latina, and no one is likely to star in an actual telenovela, the group members represent a variety of cultures: Guitarist Maggie Argyros’ family is from Greece, but she was raised in New York City; bass player Hanna Klein is from Romania; and Nikkie McLeod is from Trinidad and Tobago.

Despite their international backgrounds, there is nothing “world music” about their sound. You can hear the influence of the Pixies and PJ Harvey more than Mediterranean guitar riffs or African drum beats, but McLeod says that even if it’s not recognizable at first, each band member brings her own background to the music. “It’s just ingrained in our psyche,” she says.

Their music is as diverse as they are. Telenovela Star’s 2007 album, Love, Lust, Sci-fi and Monsters, is about everything from dating to Dr. Who. Self-released, the album transcends garage-band quality and has a polished studio sound.

McLeod says the album (available on iTunes) is doing pretty well, but they aren’t “becoming millionaires off the project.” “Actually,” she adds, “we’d like to sell a lot more.”