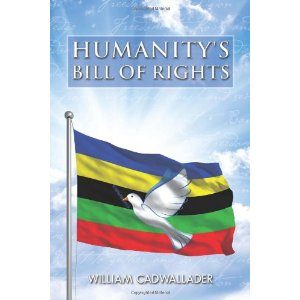 William Cadwallader calls out for a new world where human rights and equal rights are the norm.

Author William Cadwallader has created an ambitious vision that calls for a much bigger focus on fairness and equality. He says the time for selfishness and greed is well and truly over. The book addresses everything from the need for people to have freedom of speech across the board and the freedom to love and marry (William’s own marriage to Barry isn’t recognised as legal in Australia), to people’s right to privacy and the abolition of human slavery and servitude.

Originally from California, William is now based in Australia and he says the core philosophy of the book is rooted in the simple fact that we all share a common humanity. He says we have to get past the “petty bullshit” too many people are occupied with and start tackling the big issues.

William says it is both ridiculous and pathetic that Australia does not recognises their marriage.

Speaking about the publication, William Cadwallader said, “Put plainly and simply, every single woman, man and child on the planet should have the same rights.  We see too many things in the media where there are clear violations of people’s rights.  It baffles me that a whole range of rights are denied to people. We need more people standing up, more people talking and more people caring.”

“My mother taught me an enormous lesson.  All people are equal.  No-one is better than anyone else.  So many of the problems in this world can be traced straight back to people violating the rights of others. As a gay man I have – I believe – experience discrimination my entire life. I don’t expect this book to change the entire world. I know it will start something.”

“Today we continue to exploit harm, enslave and insult people.  We may be all different with different languages, but we are all one and we all have the same right to live upon this earth.”

“I realise many people wonder if people so diverse can actually live together without war and conflict.  Australia is a perfect example.  It’s a huge melting pot.  In theory we should be one of the most violent places around.  The reality is most cities have relatively low crime rates.”

William Cadwallader say the time for selfishness and greed is well and truly over.  He says there needs to be much more focus on fairness and equality.

William Cadwallader said, “We seriously need to re-think a lot of things.  We’ve got to get past the petty bullshit that we occupy ourselves with.  We’ve got to get on with the important matters at hand.  Many people are suffering and being badly mistreated because of our own greed and stupidity and this can change.”

Cadwallader has degrees in English Literature and Computer Science, comes from a family of school teachers and educators and is happily married to his husband Barry.  He had to fight for two and a half years to get residency so William and Barry could be together. They live in Melbourne.