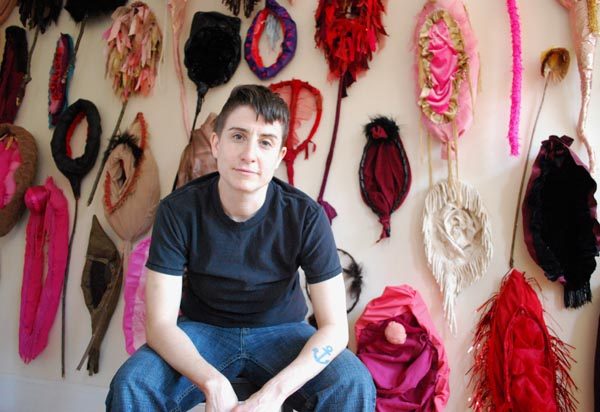 The artist’s Hole-y Army of choreographed queers and hand-made puppets will show NYC that marching can be a “hole” lot of fun.

Queer multi-media artist and Montreal native, Coral Short, is about to unleash her Hole-y Army of 100 radical queers, 100 colorful fabric puppets and an array of new moves. At NYC Dyke March, Short will display a fantastic carnival of soft sculptures in the shape of luscious, sparkly holes. Community members will carry the holes on poles as they fall in line to the choreography of Brooklyn based lesbian performance artist, Ariel Speedwagon.

Short’s puppet revolution is part of what she believes to be a “queer renaissance” of mainstream gay politics. Through holes of all genders, shapes, colors, bodies and sizes, the puppets manifest an all-inclusive celebration of difference and allow all who have ever identified as dyke to join. Curve had the privilege of chatting with Coral Short about her Hole-y spectacle.

What inspired The Hole-y Army?

I wanted to create a visual project that was in celebration of the diversity of community. I also wanted this playful colorful carnival to help address some of the issues that are happening within our communities and to give our communities a visual aid to promote interesting dialogue.

Why an army? Is there going to be an invasion of the Dyke March?

This is about fun, celebration and carnival so there is no invasion. We are creating an ironic camp version of the traditional patriarchal structure of the army, but creating it in a purely playful queer and matriarchal way. It is also a localized pun. We are nodding to Andrea Zanin, one of our Canadian queer sex-positive queens, who created the Unholy Army, which runs this event on the east coast of Canada.

You and Ariel Speedwagon are really involving the NYC queer community by allowing all who want to participate join the army. How did you decide to involve 100 queer community members?

We believe in involving community in our art practice. Our work is a social practice. The synergy is powerful between audience and artist when the fourth wall is removed as it is in queer cabaret. We both believe in accessible art and the idea that art should be available to everyone, especially our beloved 15,000 dykes in N.Y.C.!

The Hole-y Army is supposed to bring the “protest” back into the traditionally feminist Dyke March.  How are you doing this?

I feel that what we are doing is stirring a great amount of dialogue in our community, but it is dialogue that is much needed. We are bringing up the concerns of a new generation that sometimes did not feel über welcome at the dyke march. People were asked, “do you belong here?” by marshals. In our opinion if you feel you belong at the dyke march you belong. Our community is ever changing and we wanted everyone who IDs as dyke to feel welcome, no matter what their variation of gender may be. We are asking people who have identified as dyke—past, present, future or part-time—to march with us. We believe in strength in the diversity of our community.

For more information on the Hol-y Army and how you can support visit. (coralshort.com)