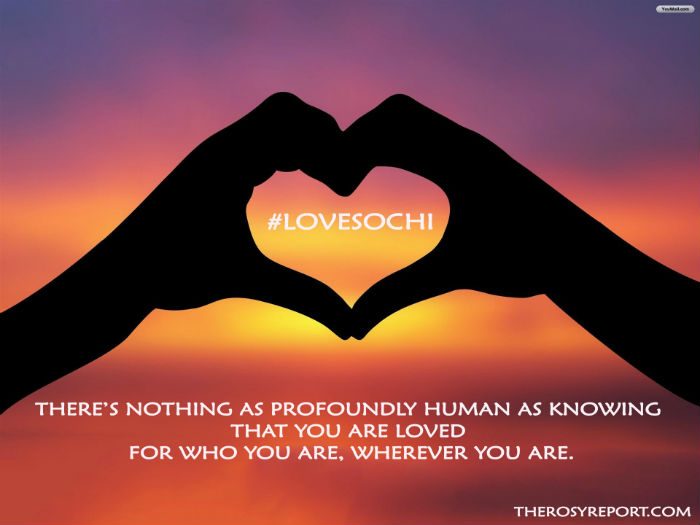 Send a universal message of love to Russians living under oppression

Vladimir Putin’s aggressive conservative agenda in Russia, which has particularly affected LGBTQ population has resulted in widespread international protest. On the 6th of February, Toronto’s WorldPride launched the #LOVESOCHI action by staging a local Toronto rally at the Russian consulate today.

WorldPride 2014 Toronto continues to lend its voice to the chorus of those who stand up for LGBTTIQQ2SA (LGBTQ) Rights, because these rights are Human Rights.

#LOVESOCHI is a message of love and support to LGBTQ people in Russia and around the world who survive despite government oppression. To share your support, take a photo or video of hands making the heart symbol and share it with #LOVESOCHI  hashtag.

“We ask everyone to take a moment and actively share their love and support for the LGBTQ people of Russia during the Olympics and long after the last medal is awarded,”says Kevin Beaulieu, Executive Director, Pride Toronto. “In the face of hatred and intolerance, these courageous Russians rise up for love and freedom, and we rise up in support of them”

Vladimir Putin’s aggressive conservative agenda in Russia has resulted in protests, and violent arrests.  The mayor of Sochi asserts that there are no LGBTQ people in Sochi, an assertion we know to be untrue.

“Letting the LGBTQ population in Russia know that we have not forgotten their rights while the Olympics captivates the world is more important than what the Games themselves seek to accomplish,” says Dr. Shelley Craig, Co-Chair, Pride Toronto.  “Higher, Faster, Stronger may be the Olympic motto, but it should also be the motto for those fighting against anti-gay oppression: Raise our voices higher, spread our message faster, demonstrate our pride is stronger.”

WorldPride 2014 in Toronto is set to be the key platform to demonstrate International Support for LGBTQ people in Russia who live under oppression. The event is an international celebration which takes place from June 20th -29th that incorporates activism, education and the history and culture of global LGBTQI communities.  It is also one of the largest Pride celebrations in the world with an estimated attendance of over one million people. It celebrates the history, courage, diversity and future of Toronto’s LGBTTIQQ2SA* communities.

To share your support, take a photo or video of hands making the heart symbol and share it with #LOVESOCHI  hashtag. You can also visit the #LOVESOCHI action site for more details: http://worldpridetoronto.com/lovesochi