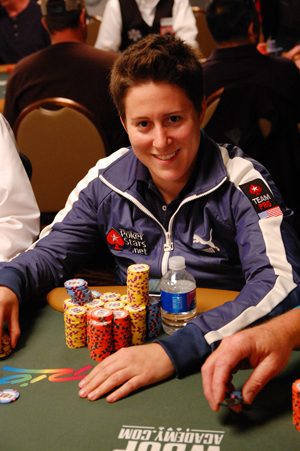 This out pro poker star is more than just a card shark.

“That was my friend Seth, actually,” Selbst laughs. Her friends and girlfriend were able to attend because the Mohegan Sun tournament takes place in Uncasville, Conn., just a short drive from Selbst’s current home in New Haven. She went on not only to win that event, but to dominate it from start to finish. In the process, Selbst earned herself $750,000—not to mention a lot of new fans, thanks to heavy television coverage that did not, alas, include the signs.

But it did include camera time for Selbst’s girlfriend, who was in attendance.  “I insisted on it,” says Selbst. “They regularly mention the other players’ wives and girlfriends and show them on camera, after all.” And with that, Vanessa Selbst became the sole out lesbian professional poker player.

Brooklyn-born and with a fast patter to match, Selbst stands out not just because she’s out and proud, but simply because she’s one of only a handful of top women earners in this ostensibly coed sport. “This is the most sexist community I’ve been involved with,” says the 25-year-old. It’s not that any individuals in the poker world have said or done anything to slight her. Rather, it’s the institutional culture that she’s up against. “Poker was always a male-dominated game,” Selbst says, but also notes that this is true for many sports and games. As those fields matured, the atmosphere changed. “I don’t know why that didn’t happen in poker.” Although it may be changing now—Selbst notes that “in the last two or three years there are a lot more women playing than there used to be.”

Selbst is hardly your typical poker pro. She does not play the game full time. Instead, she is starting her third year at Yale Law School.  As an undergraduate at Yale, she was head of the queer/straight alliance; now she’s involved in the Yale Law School OutLaws LGBT group.  She started playing poker in her junior year of college. “I was always into games and strategy and logic and stuff,” she says, and found that she had a talent for the game—a talent she has now pursued to the highest levels.

She says she never really made a decision to go pro. “In poker, as your bankroll grows, you play higher-stakes games,” Selbst notes. Soon, she was heading for tournaments in Las Vegas—and leaving with pockets full. Now she intends to use her bankroll in part to finance her law ambitions as she pursues a career in civil rights law. She says she wants to apply her skills in logic, reasoning, and strategy “to areas that need a lot of work done.” Her vision is to work pro bono on such cases and let her poker winnings pay her way, just as they’ve been paying for her tuition. Her pet legal issue, the one she hopes to hang her career on? “Police misconduct.”

Selbst is acutely aware of the power and potential that being an identifiable lesbian on the poker circuit has. “You see so few out LGBT people in the media,” she says, that even one person can make a huge difference. “You’re doing something that’s bigger than yourself.”
She’s also aware of a certain amount of backlash. “I’ve had a ton of criticism on the Internet from people I don’t know,” Selbst acknowledges. “They say I’m aggressive, and that’s absolutely true. I play an aggressive style.” Internet commentators have also predictably made cracks about her looks: “I’m not traditionally feminine” is how Selbst finesses the jabs that pretend to mistake her for male players, make jokes about her “licking” the competition, or simply declare her ugly—as if that had anything to do with her talent on the felt.

Not that her talent is really in question. This year Selbst is taking part in the World Series of Poker, the European Poker Tour, the North American Poker Tour and the World Poker Tour. She has just signed a sponsorship deal with PokerStars.net, an international no-cost poker site, which could raise her media profile even higher. Traditionally feminine or not, sponsorship deal or not, she has the potential to become a recognizable face not just to poker fans, but to the world at large.

Selbst’s advice for anyone thinking of following in her footsteps—in any arena, not just poker—is simple. “Be yourself. I think people will respect you for taking that approach.” It’s certainly served her well so far.