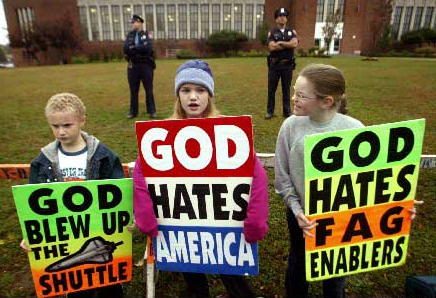 The Westboro Baptist Church has claimed that homosexuality is to blame for the massacre at Sandy Hook primary school.

According to reports at Pink News, The Westboro Baptist Church, believes that the children of Sandy Hook Elementary School were murdered as punishment from God for the state of Connecticut’s support of Gay Rights.

Church members tweeted offensive comments such as “God Almighty smacked USA with #Sandy & she’s brazen in her sin still; THEN He gives you a right hook – make that #SandyHook! #RepentingYet??”

Shirley Phelps-Roper, the daughter of the church’s founder Fred Phelps announced on her Twitter account that: “Westboro will picket Sandy Hook Elementary School to sing praise to God for the glory of his work in executing his judgment.”

‘God’s glory’ in this instance was the senseless and mindless murder of twenty children (aged between six and seven) and six adults at Sandy Hook Elementary School in Newtown, Conecticut on Friday.

The church’s founder Fred Phelps tweeted “That’s the message that this evil nation and world need: that God Almighty is on the march & nothing is gonna stop Him.”

The Westboro Baptist Church which dubs itself the ‘god hates fags’ church is no stranger to picketcing funerals – they have previously picketed the funerals of US service men and women.