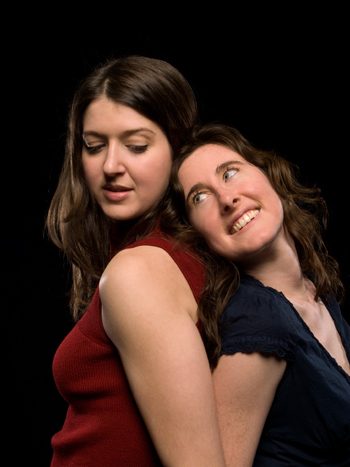 I was fetching a glass of wine at the opening night after-party for A Beautiful View, basking in the glow of an excellent evening of lesbian oriented entertainment, when I heard a man to my left say, “I didn’t expect them to be eaten by bears.”  They were eaten by bears? How could I have missed that?

Wild Kingdom plot twists aside, there is a lot to like about A Beautiful View, which opened to a sold-out audience at San Francisco’s Theatre Rhinoceros last weekend. The play, written by Daniel Macivor and directed by Cristina Alicea, focuses exclusively on the complex love relationship between two women, including loveable basketcase Mitch, played by Jeanette Harrison. “I love the way that she leaves herself so open and she’s so easily hurt…her skin is completely off in so many ways. It’s exciting. I just love her,” says Harrison of her character. The play follows the women through the ups and downs of their 20s and early 30s, including many questionable relationships, job opportunities and camping trips.

Now, back to the question of the bears. It’s no secret that there is a long history of things ending badly for fictional lesbians—from The Well of Loneliness, to pulp fiction like Spring Fire and The Children’s Hour, the ladies rarely get a chance at happily every after. But those are books from another time and I thought we were all making progress, so when this modern play (written in 2006) killed off its lesbians too, my hackles raised. Except I wasn’t so sure if that is really what happened, so my hackles lowered just a bit, but remained in the quivering position. I decided more research was in order.

Harrison, who was otherwise charming and cooperative, pretty much gave me the run around when I tried to pin her down on the play’s ending, though she did tell me, “In theatre you are a participant, the ending is not just handed to you.” Maybe she didn’t realize I went to public school and I need all the help I can get.  The director’s notes, though informative also led me down two paths, “What you see on stage is the result of my own attempts at building a classic love story that takes place in two worlds, providing both a tragic and happy end.” Apparently, Alicea had no answers for me either.

Grasping at straws, I thought perhaps my friend, who is a biologist and bear expert, might be able to shed some much needed light on the subject. In an email she informed me that, “Lesbians are the main diet of brown bears in the Yukon, providing much of the needed protein in the fall months before hibernation, but black bears in the lower 48 rarely eat lesbians. We recommend that all lesbians reduce the risk of being eaten by bears by avoiding hiking. We try to encourage more indoor activities such as drinking beer and playing table tennis.” So, I still didn’t know if Mitch and Liz were eaten by bears and I’d been reminded yet again that nobody takes me seriously.

I was beginning to realize that Macivor probably meant for things to be open-ended and ambiguous, but everybody knows Americans hate that sort of thing. Perhaps Canadian playwrights are using this torturous system to get back at us for melting their ice caps and causing acid rain.

I decided to watch the play again, hoping a second viewing might clear up my conundrum. This time I caught an afternoon matinee and there was root beer instead of wine and sunlight instead of darkness. Would the additional illumination and carbonation shed some insight on the matter?

My goal had been to figure out if Mitch and Liz really were eaten by bears and if I should be pissed about a modern-day lesbian love story ending like a 1950’s pulp novel. Why do lesbians always have to die or end up in asylums? Can nobody imagine a world where they live (even somewhat) happily ever after? Why are two women never allowed to ride off into the sunset together to start a cat ranch? Watching the play a second time did give me a better grasp of the storyline, but it also helped me let go of being so hung up on the “true” ending.

Even if the two women do end up being bear snacks, the structure of the play gives them a second chance and a shot at redemption, which is more than most of us get. It also struck me that when a story begins or ends with characters dying, it makes what comes before much more poignant. It would seem that death makes us work extra hard at making sense of life. Lots of famous plays feature the grim reaper prominently: almost all of Shakespeare, Death of a Salesman, all the Greek tragedies. But when you really like the characters, and they’re hot and seem like they would be fun to have a beer with, it’s hard to see them die, especially at the paws of a deranged grizzly bear. I need to keep reminding myself that happily ever after doesn’t make thought provoking theater, it makes a Disney Movie.

The characters in A Beautiful View are frustrating, emotionally tangled and totally authentic. They also have a lot of fun. Don’t be put off by the fact that the play was written by a man, except for a penchant for feeding his lesbian characters to large carnivores, Macivor has the sensibilities of a damn fine lesbian.

Harrison sums the work up this way: “That’s why I love this play, because it's two women who identify themselves as straight, they have one lesbian relationship in their life time, and yet that’s the love of their life and they can’t name it for what it is, they can’t recognize what it is, because they’re too afraid.” Afraid of change, societal disapproval, falling in love and bears. Don’t forget the bears.

I highly recommend you check it out for yourself and please don’t dawdle. A Beautiful View only runs until March 15th at Theatre Rhinoceros in San Francisco.