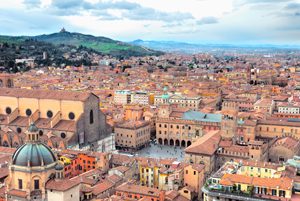 Ever the Virgo, I was planning my fifth house swap on the heels of my return from London, already itching for my next adventure. Thrifty, as always, I contacted potential home exchangers from Berlin to Geneva and Barcelona to Prague on sites like Craigslist and exchangezones.com, but it was a photo of a studio apartment in Bologna on JewettStreet.com that caught my eye.

Bologna. It seemed idyllic from the descriptions and photos sent by the occupant of said studio, a woman a few years my junior. I had doubts at first because: I didn’t know anyone there, I planned to travel alone and I was well aware that most residents probably would not speak much, if any, English. But I decided these challenges would be part of the mystique of my journey.

Then I heard that my friend filmmaker Pratibha Parmar was at Bologna’s Gender Bender Festival last year. She connected me to some Italian sisters and, by the time my trip rolled around, I was in touch with a Bologna local, Antonia Ciavarella. Antonia, who is involved in lesbian-feminist and local leftist politics and arts organizing, was the force behind bringing Pratibha to the Soggettiva program (women’s section) at Gender Bender.

Before I knew it, I was meeting Antonia beneath the statue of Neptune in the Piazza Maggiore. We spoke about our mutual friend, lesbian-feminism and the arts. She spoke English fairly well, but hardly understood my rapid speech. She was obviously over my Brooklynese by the time we met her best friend for a pizza dinner. Fortunately for her, Maria is an English literature professor in a small city outside Bologna near the Alps. Fortunately for me, Antonia did not hold my quicksilver tongue against me and got me the lowdown on several events happening in Bologna while I was in town.

We went to see eco-feminist Vandana Shiva at the Italian Women’s Library one afternoon. The same evening we attended Divergenti, an international trans film festival where many of the same individuals we had seen at Shiva’s talk were also in attendance. The trans film event was extremely important for the queer community, as it was an international commemoration of 40 years of Stonewall and 30 years of Movimento Identita Transessuale. It was a blending of the lesbian and trans communities Bologna had not previously seen.

Of course, lesbians are lesbians are lesbians, the whole world over so if you’re thinking of escaping the dyke drama, forget it now. But there are some distinct differences between the Bologna lesbians and the ones you know back home. While Stone Butch Blues is on bookshelves, Antonia told me that lesbian-feminist writers like Adrienne Rich and Audre Lorde have still not been translated into Italian. In Bologna this means the lesbian community is tied to feminist politics in particular, and leftist political and arts organizing in general. The term arci serves as an overarching category for arts and culture in the city—there is Arcigay, the Italian lesbian and gay association and ArciLesbica (arcilesbica.it/bologna). Generally arci also often indicates some aspect of anarchism, a movement that holds a historical place in the city’s political milieu. Bologna was a communist bastion of revolutionary movement, and leftist thinking is still very much present in the culture there. The city was even the home to the first university in the Western world. Today Antonia’s neighborhood, Il Pratello, houses students, artists, organizers, radicals and revolutionaries still influenced by Bologna’s Red history.

On my final day I bought my last cappuccino and brioche breakfast and went to Cassero, the local gay and lesbian community center. I met with Antonia, Elisa Manici, Daniele De Pozzo, the artistic director of Gender Bender. (As usual, the lesbians are all volunteers and don’t make a dime.) Roughly translated soggettiva means “subjective.” This group brings cutting edge female artists to Bologna every year to participate in Soggettiva and Gender Bender which takes place this year from Nov. 3 to 8. This year, Gender Bender celebrates Soggettiva’s fourth year as organizers of the special women’s program and highlights Allyson Mitchell along with other avant-garde lesbian and feminist films and filmmakers, television shows and personalities, musicians and visual artists.

After our meeting at Cassero, Antonia and I went to Museo d’Arte Moderna di Bologna for a drink and a fabulous meal of spiced polenta, various grain salads and foccacia—all free with our small glasses of wine from the bar. We toasted each other and then, both exhausted, we hugged each other tight and said goodbye, promising to keep in touch.