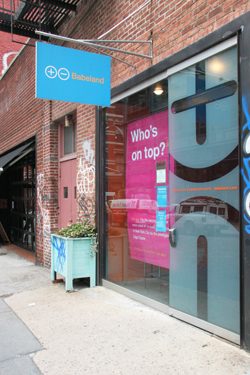 All the entrepreneurs who created the companies listed in our top 10 list of lesbian-owned businesses have at least one thing in common: They recognized and fulfilled a need in the LGBT marketplace. And, from the chef to the publisher, the fitness expert to the sex toy aficionado, all these women have used determination and market savvy to reach the top.

Founded: 1993
Employees: 63
Success Story: “We know queer sex,” say BFFs Rachel Venning and Claire Cavanah, founders of the $10 million sex toy biz. They started Babeland in Seattle because they couldn’t find a sex shop geared to women. When the store appealed to people of all orientations, they expanded to New York and Los Angeles as well. “We are lesbians, and that has put a distinctly queer stamp on the business,” say the owners. “We know how important a great dildo can be, how hot the right harness can make you feel, how hard it can be to open up to a salesperson who may not know anything about lesbian sexuality.” (babeland.com)

Founded: 1985
Employees: 300+
Success Story: Susan Feniger and straight business partner Mary Sue Milliken opened City Café with four employees in 1981. They’ve since made a name for themselves as the Too Hot Tamales on the Food Network and as cookbook authors. Now, in addition to Ciudad in Los Angeles, Border Grill locations in Santa Monica and Mandalay Bay in Las Vegas, Feniger, who calls starting from scratch “reinvigorating,” has opened Street (eatatstreet.com). Her latest venture was inspired in part by her trips to India, Turkey and Israel. “We ate from the time we got up, morning until night,” says Feniger.

Founded: 1990
Employees: 6
Success Story: Earning more than $2 million a year, the company links to some of the top LGBT sites around the country. Founder Laura Villagran says she created the Houston-based corporation with one mission in mind: “To compile a list of compassionate, caring, quality healthcare providers to care for our gay brothers afflicted with and dying in record numbers from HIV/AIDS.” Today, the Gay Yellow Pages publishes more than 40 city directories, featuring hundreds of businesses eager to do business with the LGBT community. (gayyellow.com)

Founded: 1975
Employees: 7
Success Story: In 1975, Terry Grant sold Meg Christian’s music for Olivia Records at a concert, then asked a company rep what to do with the leftovers. When Olivia Records asked Grant to be a distributor, she took the remaining music to local record shops and sold it out of her car. Goldenrod Music was born, becoming a $1 million company distributing music, DVDs and songbooks for artists such as Ani DiFranco (one of her first distributors), Melissa Etheridge, Holly Near and many others. (goldenrod.com)

Founded: 1986
Employees: 25
Success Story: “A few years ago, I was looking for some pet food for one of my dogs, who was allergic to everything,” Ellen DeGeneres has said. “I found a little company that had the perfect food for him.” She bought the food—and part of the company. Needless to say, DeGeneres’ attachment was a boost for the holistic pet care product line started by Andi Brown. The “all-natural” cat and dog grub, pet care books, grooming supplies, treats and supplements are available online or through such stores as PETCO or Whole Foods Market. (halopets.com)

Founded: 1973
Employees: 17
Success Story: “I was out in my entire adult life, except when I went on vacation,” says Judy Dlugacz. Nearly four decades ago Dlugacz founded Olivia  Records and 2010 marks the 20th anniversary of the launch of Olivia cruises, bringing entertainers to their lesbian audience. Currently the largest promoter of lesbian travel in the world,  Olivia makes about 10 trips a year to destinations from Greece to the Galapagos, featuring such A-list entertainers as Melissa Etheridge, k.d. lang, Heart, Margaret Cho, Whoopi Goldberg and Lily Tomlin. (olivia.com)

Founded: 2003
Employees: 6 (plus a trip staff of about 80)
Success Story: Kelli O’Donnell and Gregg Kaminsky founded the company that has carted more than 15,000 gay parents, their children, friends and extended family on cruises around the world. R Family takes one or two big cruises each year and plans to offer trips for smaller group as well.

Founded: 1985
Employees:  15
Success Story: Founder and CEO Kathy Wolfe is still at the helm of the company that she originated as a way to distribute lesbian films. Today, the company brings in eight figures annually, distributing successful gay and lesbian titles such as Were the World Mine, Itty Bitty Titty Committee and Loving Annabelle. Company president Maria Lynn says that Wolfe continues to expand, releasing more than 30 titles in 2009, and offering digital downloads at iTunes, Amazon and Netflix. (wolfevideo.com)

Founded: 1997
Employees: 65
Success Story: In a little over 10 years, Beth Shaw has turned the yoga industry on its ear—not a bad pose, in this case. She’s trained 90,000 people worldwide, making YogaFit one of the largest yoga schools in North America. Combining yoga techniques with a workout regimen, the company took in just under $5 million last year. (yogafit.com)