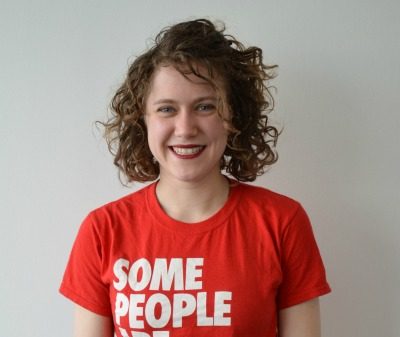 Why Angela Bryan-Brown is proud to be a Lavender Menace.

"Lavender Menace" is the infamous nickname created by Betty Friedan (American author of the Feminine Mystique), to describe lesbian activists who were apparently "distracting from" and "tainting" the feminist movement.

(For more information on some original Lavender Menaces you might want to check out this article here.)

I've always been fond of the term and those who boldly reclaimed it. They didn’t take it lying down; they organised!

During International Women’s Day it's powerful to look back on the legacy of lesbian activists who have done so much to affect positive change. And many are still active today!

One activist who hasn’t stopped is Linda Bellos — in addition to LGBT rights, she’s advocated for social and affordable housing and racial justice (she’s one of the founders of Black History month in the UK).

Angela Davis is also a force, she was at the Women’s March in Washington DC, she will be speaking at the Women of the World (WOW) Festival this March, and she gives advice to and counsels the next generation of activists.

One highlight is the plaque on the House of Lords commemorating two abseiling lesbians protesting the legislation of Section 28.

The world feels more divided and decisive than ever, and the spirit (literal abseiling lesbians!) of activists who have come before me gives me strength.

As we strive to work together and find more in common, the courage to stick to our convictions and affirm our identities in the face of adversity is rousing.

The point of the "Lavender Menace", or at least the Lavender Menace I strive to be, isn’t in fact to be inherently "threatening", but to demonstrate the resistance (and in some ways, ridiculousness) of those who still discriminate against us and don’t support our equal rights.

I’m a proud lesbian and campaigner for LGBT rights. If advocating and speaking up for an intersectional and inclusive LGBT movement is a problem to some, then call me a Lavender Menace. It’s a great club to belong to.

Want to be a Lavender Menace? Search Stonewall’s ‘What’s in my area?’ to find a campaigning group near you.